Skip to content
For some time now we have been receiving emails from our resident Honorary Member in France, Pierre  Seillier.
Pierre has done a wonderful job in honoring the memory of soldiers of the 31st Battalion who served and died in France during WW1. He has, in the past arranged plaques for a number of fallen soldiers just as he has arranged the one on this page for LCpl Johnson.  The hunt to identify as many of the soldiers found in the mass grave on the site of the Fromelles battlefield is an amazing and ongoing story. He has just sent this latest breaking news:
22 March 2019
Breaking News!!! Tim Lycett wrote me a message today. The descendants of 715 Lance Corporal Ralph Johnson, 31st Bn have announced he has been identified. Family told that we can share the information so I don’t see any requirement to wait for the official announcement…
You can read his story in Tim Lycett’s book “Fromelles the final chapter”. A German soldier named Fischer, wrote to Johnson’s father after the war and returned his belongings. Fischer also said he’d had Ralph buried in a military cemetery at Beaucamps ( Beaucamps Communal Cemetery, German Extension) but he was never found after war, when allied graves were removed from Beaucamp German Cemetery and transfered to Pont-de-Hem Military Cemetery, La Corque, France. A special memorial headstone was erected for him. Now we know he was in Pheasant Wood mass graves, and is identified and buried in Fromelles Pheasant Wood Military Cemetery.
Lest We Forget.
Regards
Pierre. 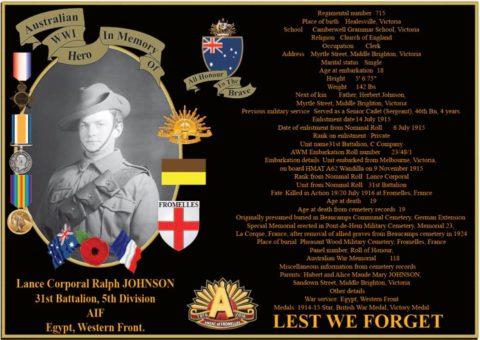