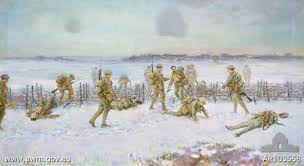 In these extraordinary times of Covid-19 restrictions, here is a special message regarding ways we might all commemorate Anzac Day 2020, from the Commanding Officer of 31st/42nd Battalion the Royal Queensland Regiment, LTCOL Damien Green.

Dawn service at home was the most unusual feature of Anzac Day 2020. Like so many others, the old digger in the picture started the day listening to the service from Canberra courtesy of ABC radio whilst watching the dawn rising over Lake Magellan, Pelican Waters, Caloundra. A local bugler added some realism to the scene by playing the Last Post at 6am and later by playing Reveille at different points around the lakeside. Many of the local residents, like those in Cities and Towns all over Australia, gathered at the ends of their driveways to commemorate the dawn service.

Members, Peter Grogan, our good mate from the 49th Bn Assoc., has passed this tribute on to us, as quite a few diggers of the 31st Bn,  41st Bn, & his 49th Bn, get mentioned. A moving tribute, produced by the Students of the Coomera Anglican College to pay homage to those Diggers from the Northern Gold Coast Area – KIA.  This was produced by the students as they were unable to attend their Normal Anzac Day Service this year.

Most of Our Members will Parade at 0600 Hrs tomorrow morning, in front of our Homes, or on our Balconies in high rise Units, dressed in Jackets, Ties, Berets & Medals, to observe the Silence & remember the fallen. Radio 4BC will be playing the Last Post at 0600 hrs so if you can have your Radio blaring, it will be almost real. –

Our Thoughts however will be. – LEST WE FORGET.