The modern Battalion Association was started in 1976 by long serving member of the unit, Capt Bob Burla RFD ED. Bob was elected as the Inaugural President of the Association and continued in that position until his death in 1995 The Association has active branches in Townsville, Ingham, Charters Towers and Brisbane. The Northern Branches have been active since 1976 and the Brisbane Branch commenced in 2000. (Current information on Office Bearers is contained under the “Branches” page of this website).

A Brief Genesis of the Battalion

31 Battalion has been through many re-organizations and amalgamations during its history. Over the years it has been given various territorial titles but it has had a continuous association with North Queensland since 1886. Initially it was established as the Kennedy Regiment Its first overseas involvement was during the Boer War where the unit was awarded it first of its many battle honours “South Africe 1899-1902”. 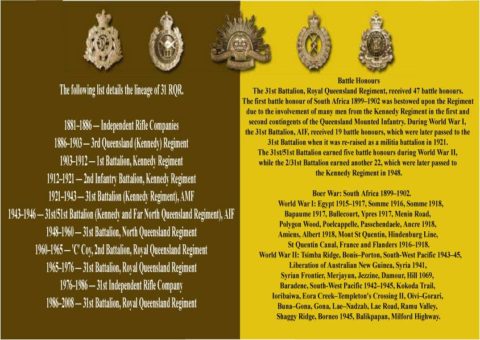 The Kennedy Regiment was the first Australian Infantry unit mobilized for service at the outbreak of World War1 when it was dispatched to Thursday Island for the protection of Australia’s northern Defences.

Because of deployment restrictions on members of the Citizens Military Forces (CMF) Many members of the regiment joined the Australian Imperial Force (AIF) when the 1/31st Battalion was first formed in July 1915. The unit was to serve in Egypt, in France and Belgium during WW1. It was during the battle of Polygon Wood that Pte Patrick Bugden won the first VC awarded to a member of the unit.

Between the wars the 31 st Battalion continued to train with HQ in Townsville and Companies spread from Proserpine to Ingham and west to Charters Towers.

When World War11 started the battalion was represented by two separate units. The 31st Battalion containing many WW1 soldiers was given the home defence tasks in North Queensland until in 1943 it was merged with the 51st Battalion to form the 31st/51st where it took part in operations in Merauke in West New Guinea and later in bloody battles in Bougainville. The unit continued to serve in Bougainville till the end of the war.

At the same time the 2/31st Battalion was raised in England in 1940 as part of 25 Brigade. In 1941 the 2/31st was in Syria fighting the Vichy French troops. It was during the battle for Green Hill near the village of Jezzine that Pte James Gordon won the VC (See “Heroes” page on this website for details).

After the battle of Jezzine the 2/31st Battalion returned to Australia, initially based in Adelaide, before moving to Casino briefl,y and then moving to Caboolture in May 1942 for further training. It was while based in Caboolture that the Pipe Band (assembled by Lt Col Toll of WW1 fame in consultation with current CO Lt Col Porter) joined the Battalion after the previous brass band had been beset with casualties in the Middle East.

After a 9 day trip by sea the 2/31st Battalion arrived in Port Moresby on 9th Sept and were soon to fight their way along the Kokoda Track. They had the honour of being the 1st Unit to enter the village of Kokoda on Nov 2nd . After further fighting they were flown out on 15th December 1942 to Port Moresby. In early January 1943 they were shipped to Brisbane and Cairns and dispersed on leave.

Once again they were deployed to New Guinea to take part in the battle for Markham Valley and Lae. The final bloody battle was the assault at Balikpapan in Borneo.

For 10 years between 1976 and 1986 as a result of the Government Miller committee review it was reorganized to 31st Independent Rifle Coy.

In 1986 the unit was re established as the 31st Battalion The Royal Queensland Regiment.

In more recent years it has been again re-organized and amalgamated with the 42nd Battalion to become 31st/42nd Battalion Royal Queensland Regiment. 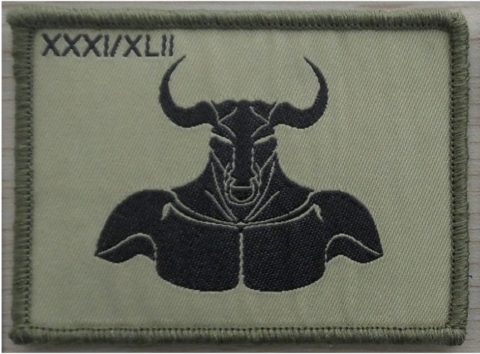 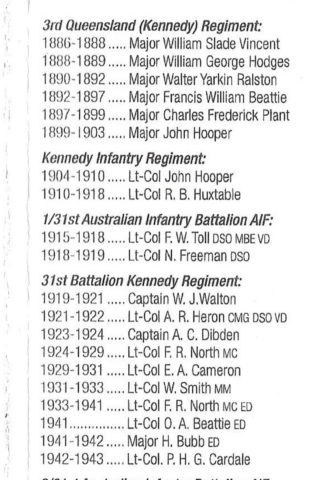 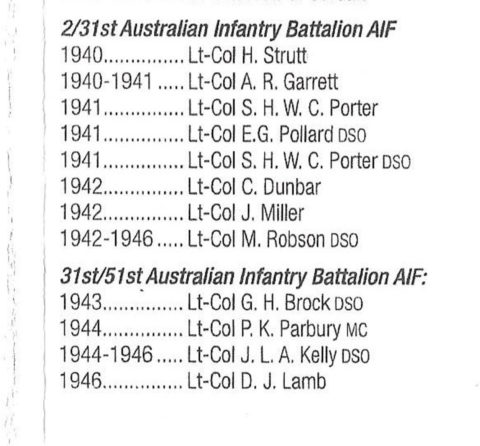 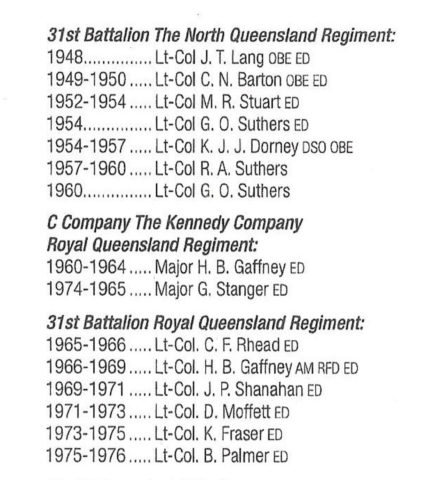 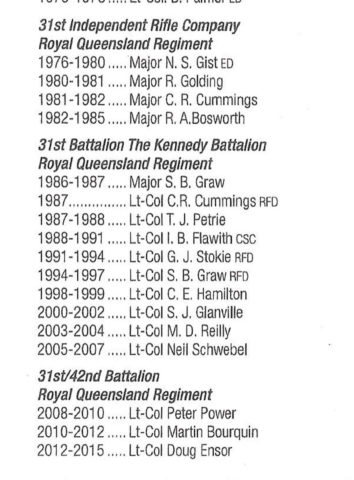 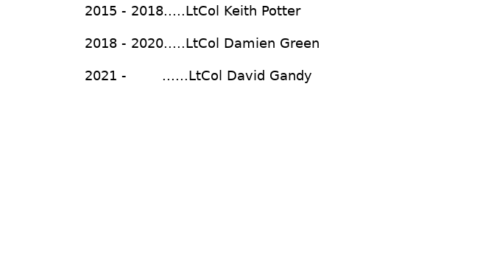