This year the 31st Bn Association was represented in two Commemorative Services to Honour of the fallen in “The Battle of Fromelles” .  (1) At the Actual Commemorative Service held at Pheasant Wood Cemetery Fromelles France. This Service was organised by Dept. of Veteran Affairs & the Australian Embassy in France, in conjunction with the Fromelles Authorities. We were represented at this service by our local Honorary Member Pierre Seillier, & Brisbane Branch Member Bruce Lees & Wife Dianne. Pierre laid a Wreath on our Behalf.

The Headstones of two previously missing 31st Bn members recently identified by DNA were unveiled. Bruce & Dianne were present in support of the Dunn Family whose Grandfather Pte. Leslie Clark Dunn,  Headstone was unveiled by Grandson Mr Roley Dunn. Pierre had previously presented his Famous tributes of all the 7 Diggers recently Identified to the Family Representatives attending the Ceremony. The Australian Ambassador sought out Pierre after the Ceremony to Congratulate & thank him for his dedicated work for the remembrance of the Australian WW1 Diggers & help given to family members over many years.

(2) For the first time our Association was able to organise a local Commemoration Service on the 19th July at the Graveside of a 31st Bn Digger who participated in the Battle of Fromelles & later was awarded a medal for Bravery – Lt Arthur Adams DCM,  buried at the IPSWICH General Cemetery. Details of the Ceremony and the address by the CO of 31/42 RQR, LTCOL Damien Green were  reported in a post on this website in July. We had excellent press coverage with Photos in the Moreton Border News on 26th July. Photos can be viewed on our Website. (See Commemoration of 103rd Anniversary – Battle of Fromelles).

We include here an email received from Pierre describing the events of the day at Fromelles:

Yesterday for the anniversary of the Battle of Fromelles, I was very early at Fromelles before the ceremony, to meet Australian friends, at the Museum of Fromelles in the afternoon. The staff of the Australian Embassy came with the families of the 7 soldiers identified this year, to visit the exhibition and then the battlefield. One of the members of the embassy introduced me to the families and I was able to give them the posters / tributes I had done for them including 31st Bn men. It was a very moving moment, two ladies had tears in their eyes, and me too. The ceremony was great, full of people,  I laid a wreath on behalf of the 31st Infantry Battalion Association. Graves of the new identified soldiers were dedicated with families and kids of Fromelles. After the ceremony we had a drink in the Fromelles Cobbers School, and I had the surprise to see his exellency Mr Brendan Berne Australian Ambassador in France, who came to thank and congratulate me for my work for Australian Remembrance.  He was surprised by the fact that a frenchman have a strong devotion for Australia and Australians. I was very moved…It was a great ceremony. You can see the full album on our Facebook page.
Lest We Forget
Kind Regards
Pierre Seillier.

Pierre has spent many years as a Voluntary Fromelles Battlefield & Cemetery Guide, he also Voluntary helps out at the Local Museum. Pierre is loved by countless Australian relatives of the fallen. Pierre has also produced thousands of Tributes to the Fallen at no charge, to relatives of the Fallen. Pierre wears his Beret with the 31st Bn badge with pride, & we are Honoured he is placing the Wreath on our behalf at the Commemoration Ceremony on the Day & at the  place of the Battle.

Attached Photos of Honorary Member Pierre Seillier at Fromelles, & talking to the Australian Ambassador after the Ceremony, he appears to be showing him the 31st Bn Badge on his Beret. 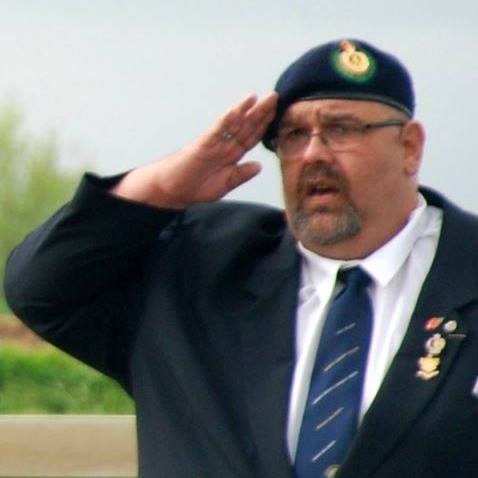 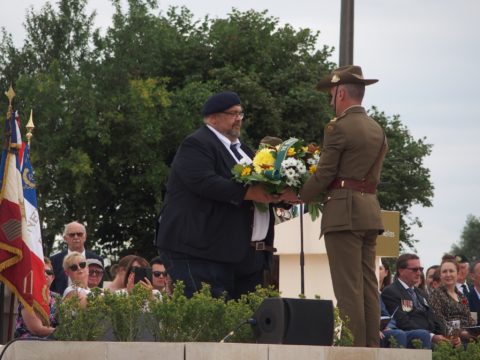