Members, It is my sad duty to advise you of the passing of Association Life Member, – John Gardner MBE. –  John passed away last Saturday night – 8th May after a long illness.

John Gardner was born in Ingham in 1932, educated at Ingham State Primary School & then as a boarder at Toowoomba Grammar School. John’s father was the well established local Pharmacist. John, following his Fathers footsteps studied Pharmacy at The Central Technical College Brisbane, graduating in 1954. Prior to Graduation, John was selected as the Central Technical College’s Student Representative to attend “The Royal Ball” at the Brisbane City Hall. His partner that Night was Patricia Gent, who later became his wife of 62 years.

John then returned  to Ingham, to take over the Family Pharmacy formerly owned by his late father, & became very involved in local activities, Apex, Jaycees, Ingham Little Theatre, Archery, & Golf Clubs to name just a few. Invited onto the Ingham Ambulance Committee, he served in various Positions & finally Chairman, he was the longest serving Committee Member in the history of the Ambulance in Ingham. He was involved with many more community Service activities, far to many to list here.

John joined the CMF in Ingham in 1957 as a Private Soldier – C  Company, of the 31st Infantry Bn. He rose through the ranks, and eventually, as a Major, promoted to, OC, – C Company in 1968. John retired from the CMF, with rank of Major in 1971.  John remained in close contact with the Regiment, as Chairman of the Ingham Recruitment Committee for a period, and was the Anzac Day Parade Marshall in Ingham, for many years. John was awarded an MBE (Military Division) in 1970 for service to the Citizen Military Forces. John was the Editor of “The Whispering Boomerang” the  Association Bulletin from 1994 to 2008.  He was made a “Life Member” of the Ingham Branch of the Association in 2006, and in 2019, “Life Member” of the 31st Infantry Bn Association Inc..

John, also was the Editor of the Series “Lives and Times Volumes 1 to 4. – Editor of the Book “Detoured to War” & collator of a collection of Poems titled “Voices in Verse”.

John Gardner was still involved with the 31st Bn Association even whilst he was ill. Providing support, congratulating and encouraging Committee Members in all of our activities. He was a great Soldier, a great Leader and a true friend. John will be greatly missed by all of us who knew him, – But Never Forgotten.

In a final act of Community Service, John bequeathed his body to the Department of Anatomical Services at the University of Queensland.

Johns wife for 62 years Patricia, predeceased him in 2019, his ashes will eventually be laid to rest with Patricia’s at St Andrews Anglican Church, South Brisbane, where he and Patricia met as choristers in 1955, and where they were married in 1957.

Further information has just been received from Association Secretary – Brisbane Branch – Tony Wadeson – regarding a Memorial for John:

Members,  I have been advised by John Gardner’s Daughters, Hilary, Jocelyn, & Paula, that a Memorial Service will be held for John at 10.30 AM, next Wednesday 19th May

Transport:- Anyone who requires Transport please advise me & I will investigate the courses open. That includes anyone flying down from the North, & requires a lift from the Airport. 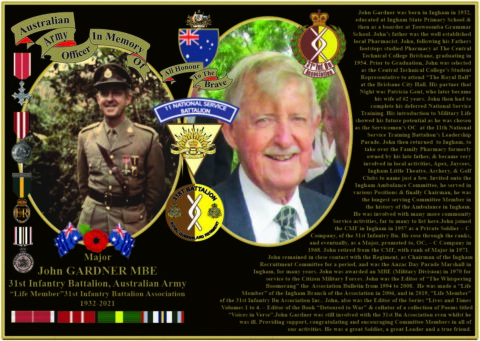