MONDAY the 19th of July 2021, – IS A SPECIAL DAY IN THE HISTORY OF THE 31st BATTALION. – The 105th Anniversary of the Day the 31st Infantry Battalion AIF went into action, for the first time on the Western Front at Fromelles, as part of the 8th Brigade, – 5th Division AIF.  It ended in a Disaster, resulting in the Highest casualties sustained by a Division in 24 hours in a Australian Military History.

You are Cordially invited to attend The Commemoration Service of the Battle to be held at the Ipswich General Cemetery on Monday 19th July at 1100 Hrs. (REFER ATTACHED) We ask you as members and Friends  to make a special effort to attend. This year we have Students and Teachers from three Ipswich High Schools attending. The Mayor of Ipswich, Mayor Teresa Harding, and the Federal Member for Blair The Hon Shayne Neumann have requested invitations to attend.

PLEASE ADVISE ME IF YOU WISH TO LAY A WREATH.

ASSEMBLY:- No later than 1045 Hours – Cenotaph – Ipswich General Cemetery – Warwick Rd Ipswich. Service will take approx. 1 Hour. You may require a Hat or an Umbrella.

If you require a seat. PLEASE BRING A FOLDING CHAIR.

We will be adjourning to the CSI Club Ipswich for refreshments & a Light Lunch (Own Expense) after the Service. You are most welcome to join us.

RSVP:- by 5.00PM – WEDNESDAY 14th JULY  – (A) If you are attending the Service. (B) If you intend to join us for a light lunch at the CSI Club in Ipswich. Contact TONY WADESON by email.

If you wish to attend but are concerned about Transport. Please advise me & I’ll see what can be done. 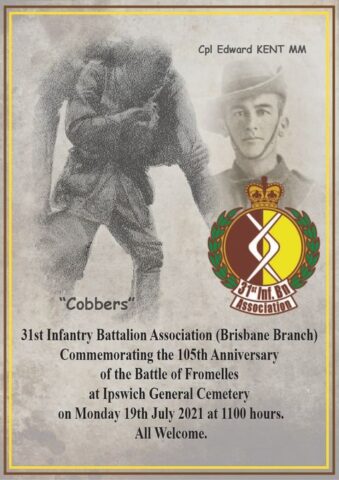