Skip to content
This is part of a discussion between Lambis Englezos and Fromelles Battle Veteran Bill Boyce of 58th Battalion,15th Brigade held at Warnambool on Sept 5th 1992 Lambis had been friends with  some veterans of the Battle for
many years. They referred to themselves as “19th of July Men”. The discussion starts with mention of the “Sugar Loaf” which was the objective (shown in the picture below) of the 15th Brigade being at the right flank of the Australian attack.
– 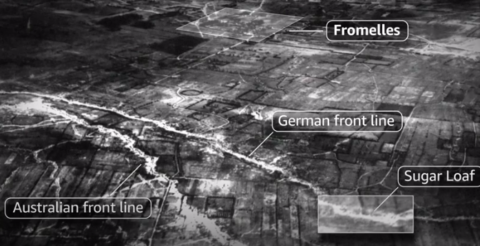