WHEN the French Foreign Legion flagged its place in military history at the Battle of Cameron on April 30, 1863, it created a permanent narrative that is read annually before the troops of the elite French unit on the date that marks the battle’s anniversary — and Legion Day.

The ‘Story Of Cameron’ is an epic version of a battle between the Foreign Legion and the liberal troops of the Mexican Government, during the French expedition into Mexico. It has become legend in French military history. 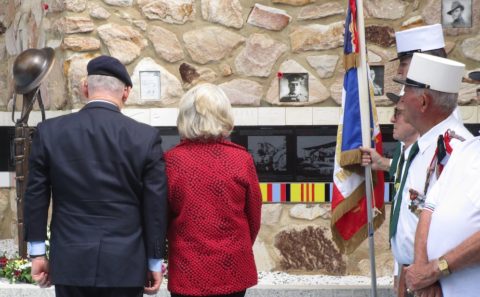 Secretary of the Brisbane Branch of the 31st Infantry Battalion Association, Tony Wadeson, and his wife Ronda, lay a wreath at the cenotaph. Ronda’s uncle and Tony’s relation were both killed in the first Battle of Bullecort on April 11, 1917.

On Sunday, April 30, 2017, amidst a mix of uniforms, headwear and accoutrements from fields of warfare past relative to the nations of Australia and France, a Commemoration was held at the Geebung Zillmere Bald Hills Aspley sub-branch to honour not only the 154th anniversary of Cameron Day, but the first and second Battles of Bullecort on the Western Front in World War I.

Camerone Day is the most important event of the Legion Etranger, as it best represents the fighting spirit of these men. The wooden prosthetic hand of Captain Danjou is brought-out for display and veneration in special ceremonies at the Legion headquarters at Aubagne, France. On that day, Officers prepare the coffee for their men to celebrate the one they didn’t have time to drink before the battle.

Captain Jean Danjou is a renowned leader in the annals of French military history. He was born in Chalabre, enrolled in the Ecole Speciale Militaire de Saint-Cyr — the foremost French military academy — and graduated from the Academy at the age of 20.

The story began when the French Army beseiged Puebla. The mission of the Legion was to ensure the circulation and safety of the convoys for 120kms.

The Commander, Colonel Jeanningros, learned on April 29, 1863, that a large convoy carrying three million in cash, siege equipment and ammunition was on its way to Puebla.

Captain Danjou, his adjutant-majorm decided to send a company to meet the convoy. The third company of the Foreign Regiment was designated — but there were no officers available. Captain Danjou himself took command; sub-lieutenants Maudet (standard bearer) and Vilian (payor) joined him voluntarily.

On April 30, at 0100hrs, the company with a strength of three officers and 62 men, set out. They had travelled about 20kms when, at 7am, they stopped at Palo Verde to make coffee. At that moment, the Mexican force of 2,000 (800 cavalry and 1,200 infantry) appeared, and fighting began immediately. Captain Danjou ordered that a square be formed and, while withdrawing, successfully repulsed several cavalry charges — and inflicting severe losses on the enemy. 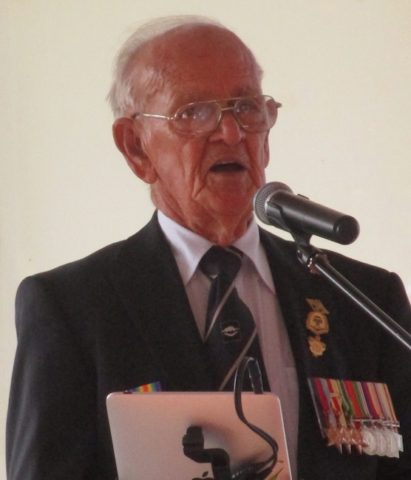 A 94-year-old Rat of Tobruk addressed the Commemoration lunch.

They retreated to the nearby Hacienda Cameron, an inn protected by a three metre high wall.

Captain Danjou’s plan was to create a diversion for the enemy forces to prevent attacks on the approaching convoy.

While the men were hastily organised the defence of the inn, a Mexican officer — asserting his great superiority — summoned Captain Danjou to surrender.

He replied: “We have cartridges, and we will not surrender.”

Then, raising his hand, Captain Danjou swore to defend to the death — and caused his men to take the same oath. It was then 10am.

Until 6pm, the 60 men who had not eaten or drank since the day before, and despite the extreme heat, hunger and thirst, resisted the 2,000 Mexicans.

At noon, Captain Danjou was killed with a bullet to the chest. At 2pm, Second-Lieutenant Vilain was felled by a bullet to the front. At the same time, the Mexican colonel succeeded in setting fire to the inn.

Despite the heat and smoke that increased their suffering, the Legionnaires stood their ground, though many were wounded. By 5pm, with Second-Lieutenant Maudet in command of only 12 men still able to fight, the Mexican colonel assembled his men and told them of the shame they would bear if they could not bring-down that handful of brave men.

(The words were recorded by a Legionnaire who understood the Spanish language).

The Mexican strategy was to make a general assault on the breaches that they had succeeded in opening — but not before Colonel Milan send another call for Lieutenant Maudet to surrender. This offer was repulsed with due contempt.

The final assault began. Soon, there were only five men with Maudet — Corporal Maine, Legionnaires Catteau, Wensel, Constantine and Leonhard — and each had one cartridge left.

They stand with fixed bayonets, in a corner of the courtyard, they back against a wall, and they face their enemy.

On command, they each discharged their last round at point-blank range and bayonet-charged the enemy. Lieutenant Maudet and two Legionnaires were beaten to death. Maine and his two comrades were about to be massacred — when a Mexican officer intervened and saved them.

“Rendez-vous!” he shouted. “We will surrender if you promise to raise and care for our wounded — and if you leave us weapons.” They stood alone — their bayonets trained on the enemy.

The Mexican officer replied: “Nothing is denied to men like you!”

Declaring his admiration for their courage, the Mexican officer spared the surviving men and allowed them to form an honour guard for the body of Captain Danjou. They were later released and repatriated to France. Captain Jean Danjou was buried in Cameron on May 3, 1863.

Captain Danjou’s men maintained their oath to the end. For 11 hours they resisted 2,000 enemy — killing 300 and wounding just as many. Through their sacrifice, they fulfilled the mission entrusted upon them — saving the convoy.

The Emperor Napoleon III decided that the name ‘Cameron’ should be inscribed on the flag of the Foreign Regiment, and that the names of Danjou, Vilain and Maudet be engraved in gold letters on the walls of ‘The Invalides’ in Paris 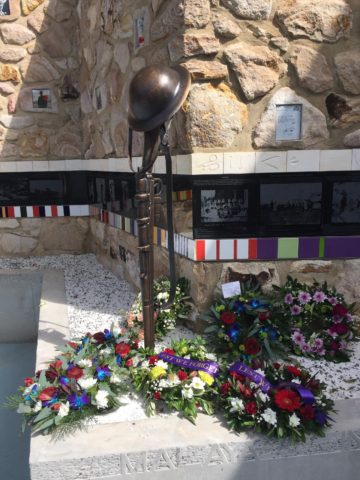 Additionally, a monument was erected in 1892 on the site of the battle. It carried the inscription (written in Latin):

They were here less than sixty
Opposed to an entiry army,
His mass crushed them.

Life rather than courage
Abandoned these French soldiers — April 30, 1863.
To their memory, the country raised this monument.”

Since then, when Mexican troops passed in front of the monument, they presented arms.

The original monument has since been abandoned, and another built. It was officially inaugurated in 1963 on the centenary of the Battle of Cameron, and carries the inscription written in French:

They were here less than sixty
Opposed to an entire army.
His mass crushed them.
Life rather than courage
Abandoned these French soldiers. 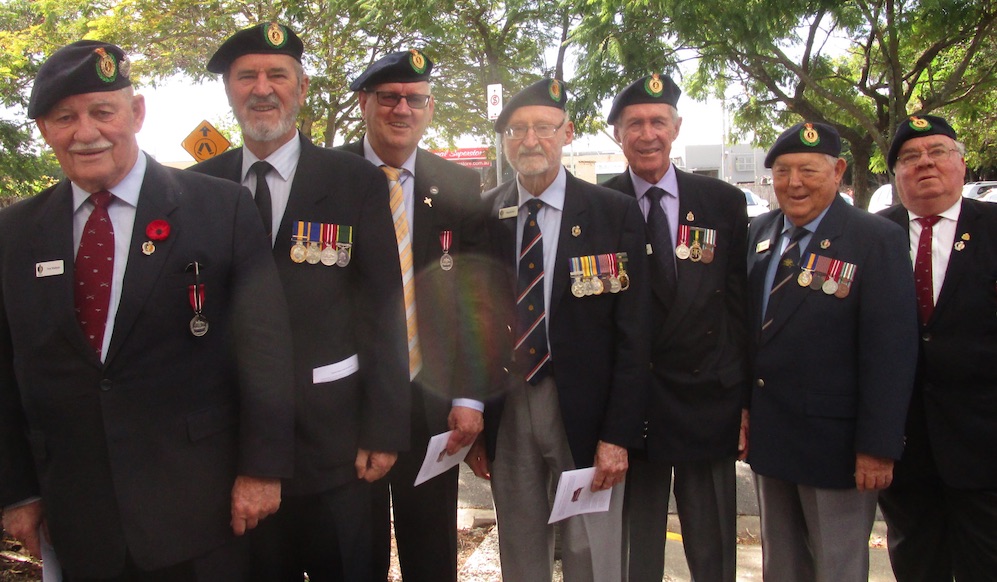 Following the ceremony, a lunch was held within the GZBHA RSL Club, where the food and entertainment was decidedly French.

During the speeches, mention was made of the 42nd Battalion and its feats on the Western Front, where is earned the nomenclature of “the Australian Black Watch.”

In recently times, the 31st Battalion has been combined to form the 31/42 Battalion of the Royal Queensland Regiment.

Pictured below are some interesting aspects of French life that confronted our members. 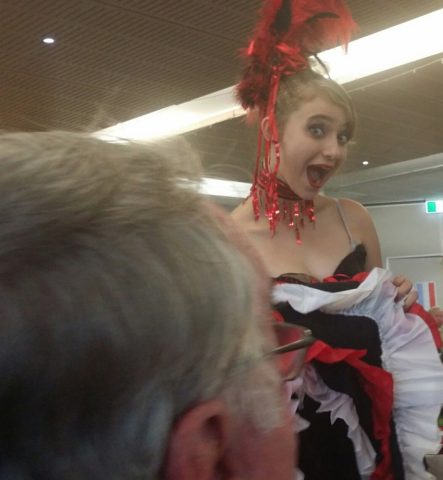 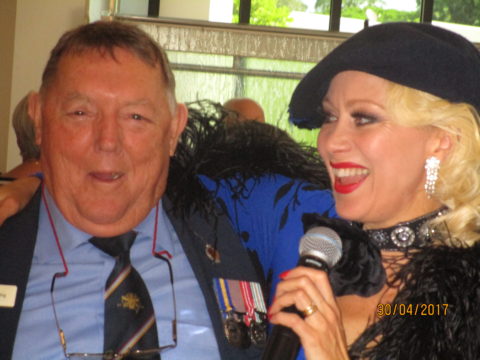