The commemoration service for the 103rd anniversary of the Battle of Fromelles was held on 19th July 2019 at the grave site of a member of the 31st Battalion, Lt Arthur Edward Adams DCM  who is buried in the Ipswich Cemetery. The service was conducted by the president of the Brisbane Branch of the 31st Battalion of the Association Ray Fogg. The current CO and RSM of 31/42 RQR, LTCOL Damien Green and WO1 John Stafford plus the President of the 31st Battalion Association Greg Stokie all flew from Townsville for the commemoration service. Also in attendance were the presidents of the Rosewood RSL Ken Savage and the President of the Ipswich RSL Rob Wadley. Padre Peter Woodward conducted the prayer service. The last post was played by Brad Strong of Rosewood RSL. Lt Arthur Adams, whose story was retold on this website earlier this month was originally from Rosewood and fought in the Battle as a Private before subsequent promotions to Leiutenant and being awarded the DCM.

The service was attended by more than 30 members of the 31st Battalion Asosciation, the 42nd Battalion Association and the Ipswich and Rosewood RSLs. Most adjourned for lunch refreshments and fellowship afterwards at the CSI club in Ipswich.

During the service the following address was presented by the Commanding Officer 31/42 RQR LtCol Damien Green:

At around 1800h on Wednesday 19 July 1916, in full daylight on a clear sunny day, the 5 th
Australian Division answered the call to attack and was thrown against the German front
line as a diversion to help support the massive British offensive then in the balance at the
Somme. The location of this diversion was 16km from the industrial city of Lille, between
the Fauquissart-Trivelet Road and Cordonneri Farm, an area overlooked from Aubers Ridge
to the South. The ground was low lying and much of the defensive fortifications by both
sides consisted of building breastworks rather than trenches. The Enemy consisted of the
6 th Bavarian Reserve Division supported by the two flanking Divisions of the German 6 th
Army. In the ranks of the enemies 16 th Bavarian Reserve Infantry Regiment at Fromelles
was a young despatch runner named Adolf Hitler who, during the battle, faced the direct
fire of advancing Australians in the conduct of his duties.
At that time the 5 th Australian Division comprised of the 8 th , 14 th and 15 th Infantry Brigades
– each, in turn were made up of four battalions and support troops. The 8 th Bde (drawn
from SA, WA, Qld and Vic) comprised the 29 th , 30 th , 31 st and 32 nd Battalions; 14 th Bde
(NSW) the 53 rd , 54 th , 55, and 56 th Battalions and 15 th BDE (Vic) the 57 th , 58 th , 59 th and 60 th
Battalions. The 31 st Battalion comprised approximately 1000 men broken up into four
companies A and B Coy from Queensland and C and D Coy from Victoria. In the assault the
8 th Brigade who were the left assault Brigade would have two Battalions forward 32 nd (left)
and 31 st (on the right) Battalions, with one battalion carting stores and ammunition to the
attacking troops and another battalion held in reserve.
The objective in this particular phase of the battle was to cooperate with the 61 st British
Division to attack the Sugarloaf salient of the German front. The enemy had prepared
their position well with the diggers observing from the other side of No Man’s Land the
foreboding German defensive line, all concrete and bristling with barbed wire up on high
ground out to the horizon. The flat featureless no-man’s land varied in width from more
than 350m in front of 15 BDE on the right to around 100m on the Australian left flank 8
BDE. Many of the communications trenches to the rear of the Australians which was the
source of their ammunition, supplies and reinforcements, were impassable due to flooding
or knee-deep mud.
Preceding the assault was a seven-hour bombardment of preparatory fire commencing at
11am 19 July 1916 which continued throughout the afternoon. This bombardment and all
subsequent were expected by the high command to destroy the enemy’s defences and
wire entanglement enabling the soldier to simply move in and occupy the German lines
with minimal effort or loss. The British bombardment did not go unanswered by the

Gemans who retaliated in kind by shelling the rear communication trenches and reserve
troops. It was in one of the early salvos where the ammunition and bomb dump of the 31 st
Battalion was blown up and many casualties sustained including BHQ and medical staff.
Only through the valiant efforts of the Battalions bomb throwers clearing the burning
boxes was half of the ordnance saved.
As the artillery fire intensified the Germans understood what was about to occur and
prepared to repel an assault by occupying their hardened defensive positions accordingly.
At 1732h it was H Hour and the first wave of the 31 st and 32 nd battalion moved bravely
over the parapet to commence their assault over open ground covered by the enemies
many mutually supporting Machineguns and artillery. The initial response from the
Germans was murderous particularly from the flank where the British had not yet
commenced their assault requiring the detonation of subterranean mine full of 1200
pounds of explosives to provide some protection for the Australians from the machinegun
fire. As a result, the initial losses were heavy, however, the Battalions continued to
advance and as they did, the enemy resistance appeared less intense. When the
Australians reached the German parapet, they observed the enemy running away over
open terrain to hold ground in the alleys and the dugouts to the rear. Close quarter
combat ensued and the position was held by the Australians who captured 35 prisoners in
the process of clearing the trenches.
This action created a foothold for the following waves to better move through “No-man’s
land” with the exception of Delangre farm on the extreme left flank from which there was
no cover. Confusion over objectives saw the 32 nd battalion commence an assault on the
farm, but with no cover and fierce resistance the attack failed and the Battalion withdrew
as the 31 st Battalion pushed further ahead. In the fog of war with inaccurate sketch maps,
poor communications, no cover, murderous machinegun fire by a strong well positioned
enemy and a constant bombardment of indiscriminate friendly and enemy artillery causing
enormous casualties the entire front line was spread thin and disjointed presenting huge
gaps in the Australian and British front line.
Desperate attempts were made to regroup, close gaps, establish defensive structures to
provide cover, regain communications and conduct resupply with minimal success whilst
the dead piled higher. On the left flank the Bavarian Battalions could be seen assembling
to conduct a counter-attack with the assistance of their flanking German units to
recapture the positions the Australians now held. In the fading daylight they commenced a
heavy attack which was repelled by the Australians utilising heavy rifle and machinegun
fire supported by artillery. Unfortunately, the situation on the right flank was perilous due
to key terrain remaining vacant after Australians continued their advance. The Bavarians

from the Sugarloaf moved into this position and as they did the Australians mounted a
desperate counter-attack which halted their progress but did not drive them out.
As darkness consumed the battlefield valiant attempts were made to hold ground using all
available cover as well as the conduct of spoiling attacks on the enemy establishing
positions that would endanger Australian efforts in completing their task. Just after 0200h
20 th July 1919 the Bavarians launched another counter-attack which was more powerful
than any before it which fell heavily on the right flank (31st Bn) which was all but cut off
at this point. The protracted fighting throughout the day and night saw ammunition and
provisions starting to run low increasing the amount of hand to hand fighting in pockets of
the front. At 0530h the Bavarians commenced another attack heavily supported by
bombing teams. With limited ammunition to repel this attack parties now began to return
across no-man’s land and the sector rapidly emptied with the action at Fromelles
practically over.
The only measure of success from the battle was 8 and 14 Brigades capture of 1000 yards
of enemy front-line system at the cost of 5513 casualties for the 5 th Australian Division.
This baptism of fire for 8 Brigade resulted in 1262 casualties with the 31 st Battalion
sustaining casualties consisting of 16 Officers and 528 men. This represented the most
significant loss of life in one night in Australian History. Many soldiers from this battle
were and still remain unidentified and buried in mass graves in proximity to where the
fighting took place. It is largely thanks to the work of Lambis Englezos in finding and
identifying Australian soldiers killed in the battle that this number is reducing as we
gather. Today at Fromelles the headstones of seven Australian soldiers identified from the
battle will be unveiled including two 31 st Battalion members LCPL R Johnson and PTE L C
Dunn.
In late 2010 after returning from operations in Afghanistan I toured the World War 1
battlefields with my wife and two daughters who at the time were aged 11 and 13. Prior
to the trip my wife had just finished reading the book Fromelles written by Peter Barton.
The tragedy of this battle struck a chord with her which then ensured visitation of
Fromelles became a priority.
After a long day in the car driving through the battlefields of France we arrived at
Fromelles feeling tired and frustrated with the confines of a car. These feelings
immediately disappeared as we stepped out to face the Pheasant Wood cemetery and
memorial. The scale of everything really hit home when we were standing on the ground.
Initially we thought we would be driving around to explore the entirety of the battlefield
but were quite shocked and amazed at how small the battlefield actually was. It was

almost inconceivable to me that so many people could fit let alone fight in such a a
confined area.
As we looked around to observe the open ground, the German Defence’s at the Sugarloaf
and Delangre Farm we began to really understand how it was that so many soldiers died in
that battle. The two mass graves at VC Corner in vicinity of the Cobbers memorial was the
finishing touch causing us to culminate on our comprehension of the senseless loss of life
that occurred on this day in 1916.
After reviewing the scene of the battle of Fromelles we paid our final respect to the fallen
and completed the drive to Lille in utter silence as we reflected on what we had just
seen.
The planning of the battle of Fromelles was bordering on criminal and the sheer arrogance
of the high command in their assumptions and tactical decision making was even worse.
This battle should serve as a stark reminder that thorough preparation and planning is the
least we can do prior to committing troops to fight after diplomacy has failed.
Many soldiers who survived Fromelles and the remainder of the war carried physical and
mental scars when they returned home. Many of them never recovered from their wounds
becoming casualties of war dying within years of the bells of Armistice sounded the
Germans surrender. 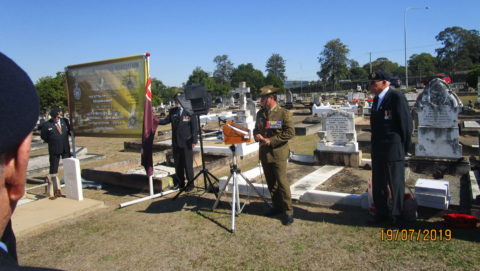 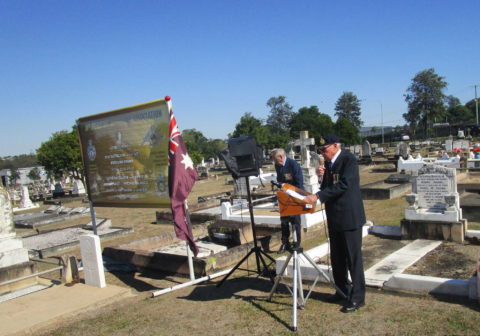 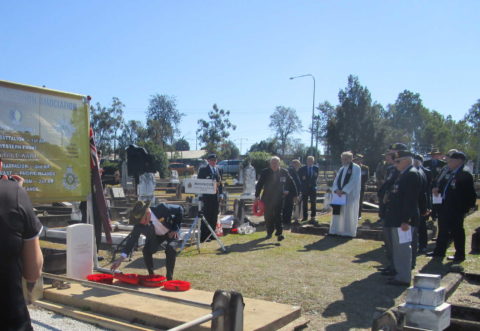 Laying of wreaths at the commemoration service (above and below) 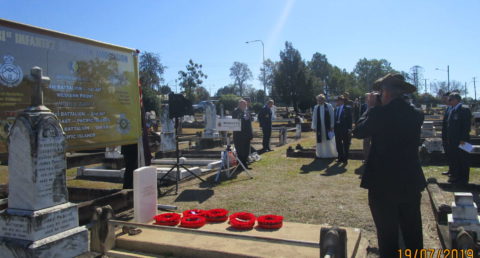 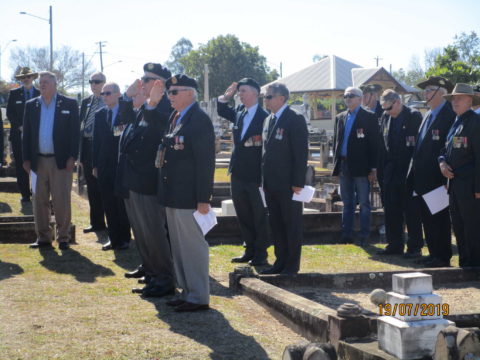 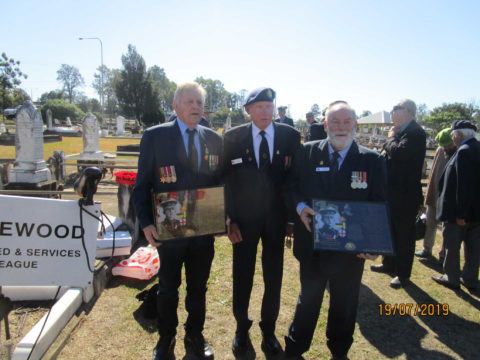 L to R in the above photo, Ken Savage, Ray Fogg, Rob Wadley