In this article Association member Mick James tells more of the story Pte William Edward “Billy” Sing DCM Croix de Guerre (Belgium), well known as “The Gallipoli Sniper”.  It precedes the story which was previously written by Mick and featured on a post to this website in May 2019 (See “Pte Billy Sing DCM Croix de Guerre (Belgium)” under the “Heroes” menu. Mick takes up the story:

In one of the few detailed letters that Billy Sing wrote home (or had transcribed for him), was a letter he wrote to his mate from the Proserpine Cricket Club, Joe Faust, one of the owners of the General Store in Proserpine.

Billy had suffered a number of illnesses/wounds from his time at Gallipoli (see additional article below). One of them was piles from his extended times at sniping, and he wouldn’t be able to ride a horse any more. He was transferred to 31st Battalion in March 1916. However more sickness  (mumps) delayed his transfer until July 1916 when he was sent to England, as the 31st Battalion had left for France in mid June. Billy arrived in England on 22 August 1916 and for 4 months was attached to a training Battalion learning about the different conditions on the Western Front.

For those who are unaware, Billy Sing was at Gallipoli from May to November 1915 as a sniper with 201 confirmed kills, said to be over 300 in total. His DCM citation states “For conspicuous gallantry from May to September 1915, at Anzac, as a sniper. His courage and skill were most marked and he was responsible for a very large number of casualties among the enemy, no risk being too great for him to take”.

At the end of December he travelled to France and joined up with the 31st Battalion just south of Albert. There were small operations going on all the time to try to keep the enemy off-balance or capture a few yards of ground. On 14th March they were fighting in the vicinity of the remains of the villages of Flers and Gueudecourt, near the old main road that led from the Allied town of Albert to the German held town of Bapaume, when Billy was again WIA. He received a gunshot wound in the leg that was later noted to be a shrapnel wound. Initially sent to a General Hospital at Rouen, he sailed from Le Havre on 21st March and was admitted to the 1st Australian Auxiliary Hospital at Harefield Park House in Middlesex which had 1,000 beds and specialist sections which included Skiagrams – early  X-rays. It was a Skiagram that identified shrapnel pieces in Billy’s leg and they operated to remove them. This Hospital also had a number of English women volunteers who attended the Hospital daily to care for the diggers, and one of them may have written the letter as dictated by Billy.

Just a few lines to let you know I am still in the land of the living. I wrote to you from France a few weeks ago, just before we went to the front line. Well (they) exploded another one on Wednesday night the 15th. We hopped over from Bapaume and had a bit of a scrap with old Fritz, and about 3 in the morning, a big shell landed just behind me and the piece of  brass nose cap hit me in the leg.

It is not dangerous but pretty sore. I don’t suppose I’ll be off my back for a couple of months. I have been under an operation to have two pieces removed, and the other day they had the X-ray on , but there was no more in it.

We had an awful time in France this winter; it was the coldest they’ve had for years. We used to be 4 and 5 nights at a time without any blankets in the trenches, and the ice in the shell holes 2 and 3 feet deep.

If you wanted water you had to take a pick and put in some hard work digging, and then the thaw came and we were bogged like sheep. I have seen cattle and horses bogged before, but not men. I got bogged and had to dig my boots out. Some places you would go down up to your waist, and have to squeal for help to get out. I pulled 4 out of one place and then all day you have to sit down in 5 inches of mud and water well off the road, shivering all the time.

We had no trenches in the place where I was hit, only roadways in two old villages. Worked 24 hours out of 24. Time it ended – they are giving the Australians a good cut at the Somme. I don’t want to see any more of France, I’ve had sufficient. let some of the others that haven’t had any action have a go – do them some good.

It would break your heart to see the dead bodies lying around unburied, all sorts in Delville Wood. There are thousands in other places; in one place there is a big memorial in memory of a division wiped out. I did not have much time to write from France, and the censor is so strict you can’t put anything in. I got a letter from you written just before Xmas, also the card from yourself and wife.

I don’t think there is any chance of us being home for this crushing, although Fritzy fell back a good few miles. He is getting pretty sick of it and most of them have not much fight in them. It is only their artillery that is saving them  at all they have plenty of that and so have we. It’s just like listening to a big mob of ducks flying overhead continually for hours, and they are bursting all round. It’s a wonder a man lasts at all.

Well, I don’t think I will write any more this time. I have a few more letters letters to write and the old leg is a wee bit painful. So hoping you are all in the best of health,

I remain your sincere friend

PS Remember me to all the boys.

This letter gives a very apt description of the atrocious conditions of diggers in the front line particularly during the very cold winter of 1916/17.

Below is a follow up article from the one above. It gives a detailed description of the ailments Billy had suffered
prior to his transfer to 31st Battalion AIF and perhaps explains the tone of his letter to his mate in Proserpine
after suffering a serious shell wound in France.

His decision to volunteer to lead a patrol to “mop up” enemy snipers after the Battle of Polygon Wood
demonstrated that he was still keen  to do his bit to help out his mates.

It was general policy with the Army to repatriate any digger who had suffered a 3rd Wounding. “

Many people today are only partly aware of the privations endured by the ANZACS, but this was even worse for snipers like Billy. Sniping positions (hides) were usually close to the front line and anywhere from 40 to 400 yards from the enemy front line and in an elevated position, if possible, to more clearly see the enemy if they stood up in their trench. As such, they were mostly exposed positions and Billy (and his spotter) had to be concealed in position before first light and remain there until nightfall. Billy was used to this discipline, as back in Proserpine, he used to cut cane during the crushing season, where they were in the field at dawn and worked till dusk. His movements were severely restricted while in the hide and this played havoc with his bodily functions.

His medical history was extensive –

At Polygon Wood on 26-28th September 1917, after the capture of the final objective and notwithstanding a terrific bombardment by the enemy, this soldier volunteered to take out a fighting patrol to mop up snipers who were causing casualties. By his dash and success in dealing with these, our front line was secured and consolidation continued. During his whole operation, his skill in picking out and dealing with snipers was uncanny

Billy suffered gas poisoning (considered a wound) from Polygon Wood and was also in and out of hospital on a number of occasions with his old leg wound.

As a result of his 3rd wound he was sent to England and on 21st July 1918 departed for Australia.

He was finally discharged on 29 November 1918 in Brisbane.

He suffered from his wounds, especially the gas poisoning, for the rest of his life and died in his sleep in a boarding house in South Brisbane on 19th May 1943. He is buried at Lutwyche Cemetery in Brisbane and in 2015 a Memorial to him was consecrated near his grave  (see below).

THE ABOVE PHOTO IS BILLY IN A SNIPING POST ABOUT 150 YARDS FROM THE ENEMY FRONT LINE AT GALLIPOLI. WHILE BILLY HAS A REST, HIS SPOTTER IS LOOKING FOR NEW TARGETS THROUGH HIS BRASS TELESCOPE 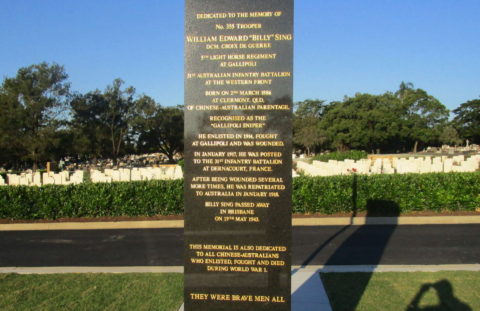