On Sunday 19th July, the 31st Bn Assoc (Brisbane Branch) held a Commemoration Service to Honour the Casualties sustained at the Battle of Fromelles. The Battle took place on the 19th/20th July 1916. This Battle, planned and organised by the British High Command, was the first battle in which Australian troops took part on the Western Front. It proved to be a disaster and was responsible for 5533 casualties, the highest sustained over a 24 hour period in the British Army, in WW1. The 31st Bn, took a major part in the Battle and we commemorate this day as most important in our history. We again draw your attention to the fact that the 31st Bn is the only battalion from the 5th Div. AIF  on strength in the ADF today.

The Service was held in Ipswich, at the Graveside of Lt. Arthur Adams DCM, – 31st Bn. Lt Adams came from Rosewood, fought in the Battle & survived, later to become the Rosewood Shire Clerk and the First President of the Rosewood RSL. We were honoured to have COL Mark Plath (Ret’d) as our Guest Speaker.  Mark is a descendant of Col Fred Toll DSO & Bar MBE VD, the CO of the 31st Bn in WW1, and who led the Bn into Battle at Fromelles.

We were also honoured to again have in attendance, LTCOL Damien Green & WO1 John Stafford, the CO & RSM of the 31st/42nd Battalion RQR.  – LTCOL Green has stated that in his Opinion – “The Battle of Fromelles is the most significant war time action in our history, worthy of remembering to encourage our younger generation, so we never forget. To be a member of the current embodiment of a Battalion involved in that Battle puts increased emphasis and responsibility on us to ensure that happens”.

We were greatly supported by both the Rosewood & Ipswich RSL Sub Branch’s. Five of our friends from the 49th Bn Assoc attended, and joined us for the lunch afterwards at the CSI Club.

Thank you all who attended, and a special thanks to Mick James who was our chief organiser of the Event.

There was also a private Wreath Laying Service held in Fromelles France, organised by the Aust. Dept of Veteran Affairs & the Fromelles Council.  Due to the Corona Virus Situation in France it was closed to the Public. A wreath was laid on our behalf by our Honorary Member Pierre Seillier.

Our special thanks go to Pierre, who also designed & produced the Tributes that we presented to COL Mark Plath & to the Presidents of Rosewood & Ipswich RSL’s. 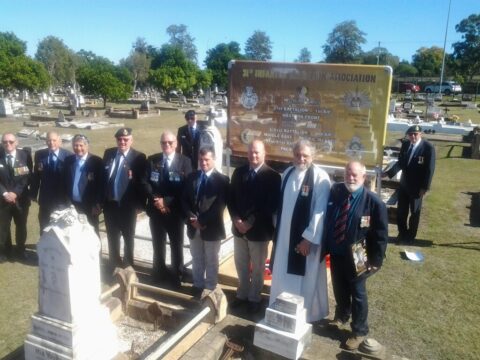 Members who attending the Fromelles Commemoration 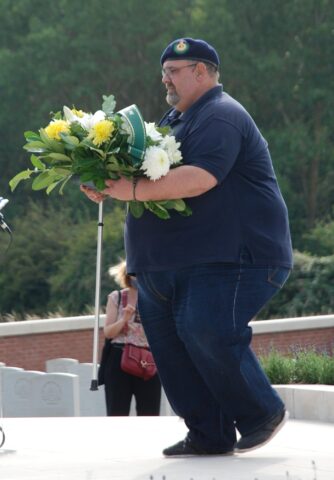 Address of Commemoration – ‘Service Above Self’

Fromelles, let me take this opportunity to acknowledge the Traditional Owners of the

Land on which we meet today, and pay my respects to their Elders past, present and

Ladies and gentlemen, good morning, and welcome to this important commemorative

service. Tony Wadeson advised a while ago that due to the COVID-19 pandemic

limitations in France, the annual commemorative ceremony at Fromelles is unlikely to

proceed, so today’s service is perhaps the only such recognition anywhere in the world

our nation. We remember especially those in the 31 st Battalion, Australian Imperial

Force during The Great War in general, and at the Battle of Fromelles in particular.

Moreover, thank you for the invitation to address this morning’s service which I

consider to be both an honour and a privilege. In titling my address, I have borrowed

the motto of Rotary International, ‘Service Above Self’, which epitomises the

sacrifices made by our forebears.

We stand here this morning at the graveside of Lieutenant Arthur Edward Adams, DCM

surviving the war, died at the tender age of just 28 years and 6 months. Not only did

Arthur Adams serve his Unit and country during conflict, but he was also the Founder

and President of the Rosewood RSL Sub-branch, hence that particular connection.

At 43 years of age, LTCOL Toll as the inaugural Commanding Officer of the newly raised

31 st and LT Adams as initially a Quartermaster Sergeant, joined together, served

together and successfully survived the war together, although I have not discovered if

they were especially well known to each other. But the unifying theme today for these

two great men and soldiers, was the attack at ‘Fleurbaix’ or sometimes referred to as

‘Petillon’, which would later become known as the Battle of Fromelles.

The attack was the début of the Australian Imperial Forces on the Western Front. The

The Australian War Memorial described it as, ‘the worst 24 hours in Australia’s entire

history.’ Of 7,080 British Expeditionary Force casualties, 5,533 were suffered by the

2,000 men and 150 prisoners. This was perhaps the greatest loss by a single division in

24 hours during the entire war. Indeed, many historians consider Fromelles the most

To the soldiers who fought at Fleurbaix, the Battle of Fromelles, was to quote, ‘an

decision-making by both British and Australian commanders and staff.’ Moreover, the

attack had little to no effect on the Somme battles, and even became cynically

dismissed by surviving soldiers as ‘that Fleurbaix stunt’.

Almost 12 months prior, the 31 st Battalion was raised as part of the 8 th Brigade at

Enoggera Camp, then on the outskirts of Brisbane, in August 1915. As an aside,

raised at Broadmeadows Camp in Victoria. In early October 1915, all elements were

united at Broadmeadows, and on the 5 th of November 1915, the battalion sailed

aboard His Majesty’s Australian Transport ‘Wandilla’ (A62) from Melbourne.

The 8 th Brigade joined the newly raised 5 th Australian Division in Egypt, and in June

1916 proceeded to France, destined for the Western Front. The 31 st Battalion fought

But what of the man LTCOL Frederick William Toll or Fred Toll, as he was often called.

I distinctly recall my grandmother, who sadly passed many years ago now, talking

enthusiastically and respectfully about ‘Uncle Fred Toll’. From her reflections and

recollections, I always formed a clear view that Fred Toll was certainly a man’s man,

who went to great lengths to ensure the welfare of his men, right up until his passing

in Greenslopes Hospital on 6 November 1955. My grandmother recalled ANZAC Day

marches including the 31 st Battalion AIF Association being led by Fred Toll, with the

parade commentator proudly announcing, ‘here comes the men of the 31 st , the pride

and joy of Colonel Toll’ or words to that effect.

education at Brisbane Grammar School. After graduating, he returned north and

amongst other things, was commissioned in the Kennedy Regiment on 2 February 1892

Toll then volunteered for service in the South African War. He sailed with the 2 nd

Queensland Contingent as a special service officer in January 1900, and from Cape

Town, joined Lord Roberts’ army in the occupation of Bloemfontein, commanding an

infantry company of the 44 th Essex Regiment. Toll saw action during the advance to

Kroonstad, Johannesburg, Pretoria and Belfast and after the capture of Nellspruit, was

appointed provost-marshal and commanded troops who then returned to Australia.

He returned to South Africa in March 1901, this time as Second-In-Command of the 5 th

Queensland Imperial Bushmen and was soon after promoted to Major. Toll

colonies and the Transvaal. In January 1902, he was captured briefly by Boers. Noting

involved, Toll gained the reputation amongst this men as ‘the Fighting Major’.

Ultimately, Toll arrived in Brisbane aboard the transport ‘St Andrew’ in April 1902 and

his appointment was routinely terminated in July of that year. During his service in

South Africa, he had been Mentioned-in-Dispatches and of the eight clasps possible,

Africa Medal with two. Toll’s South African service is often remembered at the

commemorative services for the Battle of Onverwacht.

With the outbreak of war in 1914, Toll enlisted again for overseas service. He embarked

for New Guinea in January 1915, leading the 3 rd Battalion, Australian Naval and Military

Expeditionary Force, with the rank of Major. As Lieutenant Colonel from 1 March and

Officer Commanding the troops in Rabaul, he was twice acting administrator of New

Guinea in the absence of Colonel Sir Samuel Pethebridge. At his urgent request for

active service in 1915, he was given command of the 31 st Battalion, which he formed

and trained, leaving later that year for Egypt.

As a result of the 31 st Battalion’s actions at Fromelles, Toll was recommended by his

the Distinguished Service Order or DSO. The citation for this award Gazetted on 12 th

in a most conscientious and efficient manner.

high standard of efficiency and has always been an example to his Officers and men.

Lt.Colonel Toll displayed great gallantry all through the operations of 19/20 th July 1916,

at PETILLON. He was slightly wounded at the commencement of the action and before

the assault was made and (sic) he lost heavily in Officers and men. He led the 3 rd and

4 th waves over the parapet himself. Before reaching the enemy trenches 13 Officers

has (sic) been killed or wounded, including three Company Commanders. Lt.Colonel

Toll personally took charge and pushed on, making vigorous efforts to consolidate the

position won, reconnoit-ring (sic) the enemy’s defences and taking prisoners. On the

retirement he organised the troops on our original front line.’

During the Battle of Polygon Wood, Frederick William Toll was again decorated with a

Bar to the Distinguished Service Order for his, ‘… conspicuous gallantry and devotion

to duty .’ Seriously injured and gassed at Polygon Wood he was evacuated to Britain in

January 1918. In addition to his two Distinguished Service Orders, he was also twice

Mentioned In Dispatches by General Haig.

After The Great War, Toll became commissioner for war service homes. He initiated

interest in the welfare of his former charges. He was also a foundation member of the

representative on the Mackay Hospitals Board, Director of the Mackay Rotary Club,

President of the Mackay Rifle Union, and Commandant’s representative on the North

For his services to returned servicemen, Toll was made a Member of the Order of the

British Empire in 1939. Not content with retirement, during World War II he was

Ladies and gentlemen, in conclusion, let me reprise the notable and distinguished

service in war and in peace of Lieutenant Arthur Edward Adams, DCM and the

marksman, athlete and Rugby footballer, in my mind certainly and I now hope in yours

too, both of whom epitomised the ethos of ‘Service Above Self.’ 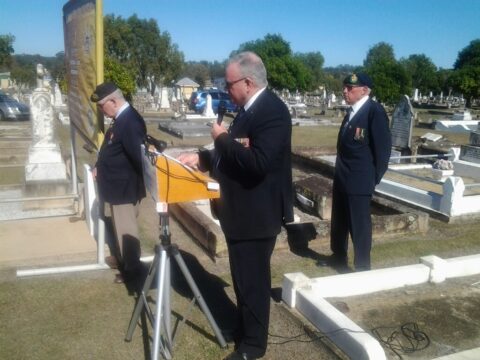 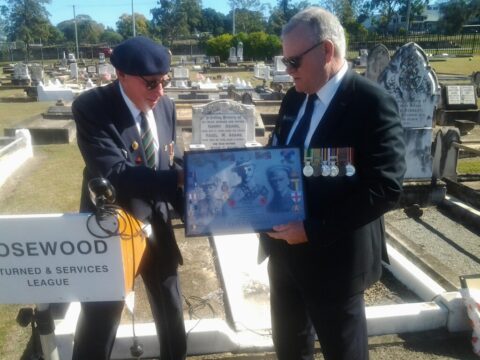 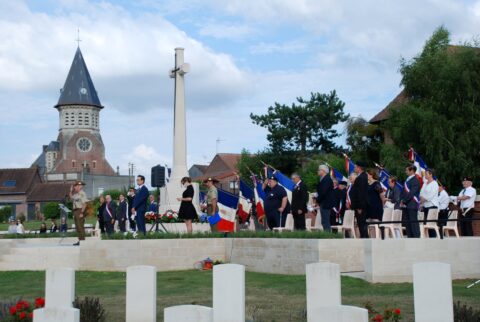 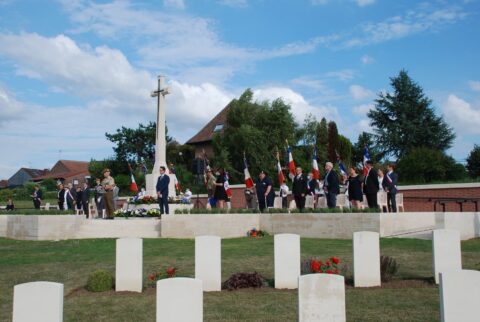 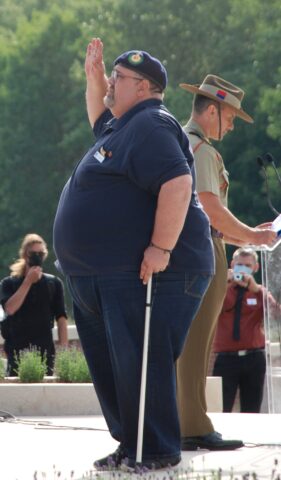