Skip to content
Our Honarary Life Member in Fromelles, Pierre Seillier sends this report to our Brisbane Branch Secretary Tony Wadeson
and Committee member Mick James:
–
Hello Tony and Mick,
–
Yesterday was the ceremony for the 105th anniversary of the Battle of Fromelles; The president of Fromelles et Weppes Terre de Memoire 14-18 ( my french association) Mr Martial Delebarre first laid a wreath at the Kennedy Memorial in honor of the British soldiers killed in this terrible battle. Then everyone got together at Pheasant Wood Military Cemetery for the main ceremony. A large number of flag bearers were present.
–
After the welcoming speech of Lieutenant Colonel François Nozaïc, Australian Army, it was the turn of Mr Jean Gabriel Masson, Mayor of Fromelles to do a speech, followed by the Prefet of North Region and Her Exellency Mrs Gillian Bird, Australian Ambassador in France. After the speeches, Fromelles children and Australian Children ( from the families of staff member of the embassy) have laid roses on the graves of unknown soldiers (no identification confirmed this year).
–
It was the time for official to lay the wreaths, my Wife Corinne laid the wreath for the 31st Infantry Battalion Association, on my behalf due to my broken fibula…Imagine what was my surprise during the speech of Her Exellency Mrs Gillian Bird, Australian Ambassador in France, to hear my name and the name of the 31st Bn Ass, to thank me  and us for the work to keep alive the memory of our boys … Despite the pain in my leg, it was a very beautiful and moving ceremony. Lieutenant Colonel François Nozaïc who is a friend took care of me he was very kind with me and my wife… You can see all pictures on my Facebook page 🙂
Cheers.
–
LEST WE FORGET. 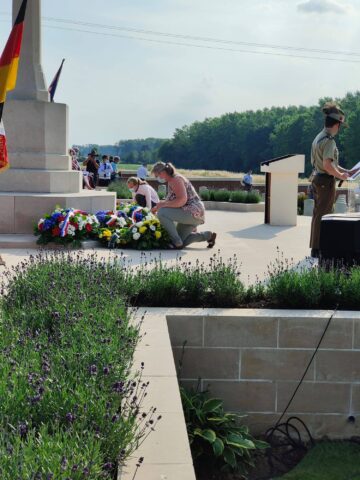 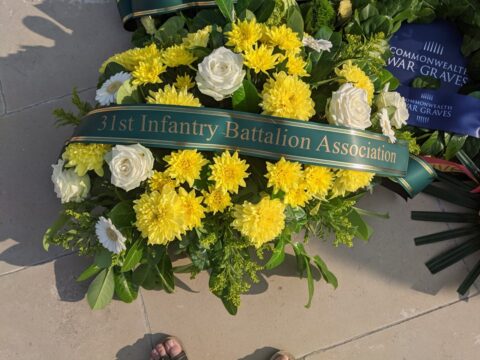 Our Association Wreath
In reply our Secretary Tony sent the following:
Pierre, thank you again for organising the laying of our Wreath at Fromelles. And a special thanks to your Wife Corinne for laying the wreath. on your behalf. It must have been painful for you to be present at the Service with your broken Leg & other injuries. I shall write & thank LTCOL Francois Nozaic for looking after you. Pierre, we have our Services here in Australia but having a wreath laid at the Battle Scene at the Precise time of the men attacking 105 years ago means something special to all of us. Thank you & Corinne for making it possible.

We believe Our small service was very successful in that the students & teachers of the four High Schools who attended, were made aware of the battle of Fromelles & went away moved and enlightened by the sacrifice of so many involved, and the pain & suffering of the Families of those who were killed, wounded & missing. We had 3 members of the Brisbane Branch of the Veterans de l’Armee Francaise d’Australie who attended, & a wreath laid by them. Mick will probably have some photos of them. We also had two serving members of the 31st/42nd Bn who  drove 8 Hours down from Rockhampton to attend the Service. The Commanding Officer & the RSM were unable to Attend as they and the Battalion are involved in a Large International Battle Excercise in progress in Central & Northern Australia, the CO however made certain the Regiment was represented at the Service. We are extremely grateful to him.

Our Service is Growing & gaining support by the City of  Ipswich Community thanks to a lot of work by Mick James & your Tributes. The Kent & Spreadborough Families & Schools were deeply moved when we presented copies of your tributes to them.

Both Melbourne & Sydney Commemoration Services were cancelled as they are experiencing a flair up of Covid-19 in their cities & are in Lockdown. I believe Our commemoration was the only one held in Australia.

Thanks Pierre, & Corinne.  Regards from all members of the 31st Infantry Bn Association & The 31st/42nd Bn Royal Queensland Regiment.

Tony continues with a more detailed report on the day:

Members & Friends, our Honorary Life Member in France Pierre Seillier who, each year, arranges a Wreath on our behalf, & lays it at The Battle of Fromelles Commemoration Service at Pheasant Wood Cemetery Fromelles. Unfortunately this year, Pierre had a bad fall, and apart from other injuries, managed to break his leg, which restricted his movement & he had to attend the service confined to a wheelchair. Luckily his Wife Corinne, was able to lay the wreath on his behalf.

Pierre has sent the above Photos showing the beautiful Wreath (with the 31st Bn Ribbon) & Corinne receiving and laying the Wreath. Pierre was no doubt not far away wearing his 31st Bn Assoc. Beret & Badge. For those who are new to our Association Pierre & his family are legends in the Fromelles area.

Mick James will be following up sending out Photos of our Ipswich Ceremony, which we believe to have been the only service held in Australia. The Melbourne & Sydney  Services were cancelled due to the Covid-19 outbreak in those two cities. Our Service this year increased in numbers & we were honoured by the presence, of Teachers & Students from 4 Ipswich High Schools, The Deputy Mayor Nicole Jonic, The Hon Shayne Neumann MP, – Member for Blair. – Two members of our Regiment – 31/42 Bn RQR, who drove the 8 Hours down from Rockhampton. Members from  Ipswich, Rosewood & Moreton District RSL Sub Branches. – 3 members of the French Army Veterans of Australia Assoc. Two Members of The National Service Pipes & Drums, Drum Major Dennis Deering, with Rolly McCartney the Pipe Major performing.

Brigadier Bill Date provided an inspiring & memorable Address.  Also, relatives of three WW1 – 31st Bn Diggers who took part in the battle, and of course our mates representing the 49th Bn Assoc. All up I believe we had over 60 in attendance on a perfect day. Pierre Seillier’s Tributes were presented to each School & relatives of the 31st Bn Diggers, & too the Ipswich RSL Sub Branch President Rob Wadley. Our Thanks go to Padre Peter Woodward, and Bugler Brad Strong, & Brigadier Bill Date, and the CO of 31/42 RQR – LTCOL David Gandy & RSM John Stafford for their support.

Below: A Few Pictures of the Commemoration Ceremony at the Ipswich Cemetery
Other Commemoration Pictures can be seen by clicking the Gallery Menu of this website. 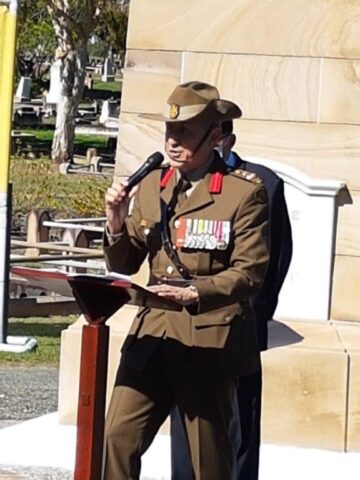 Brigadier Bill Date giving the History of the Battle of Fromelles 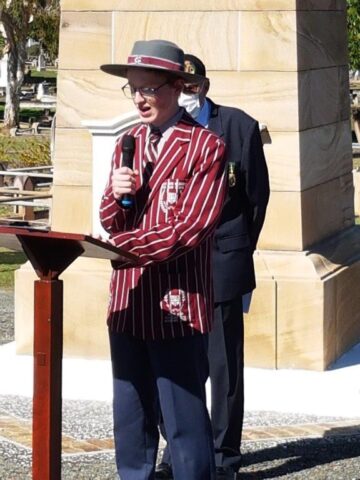 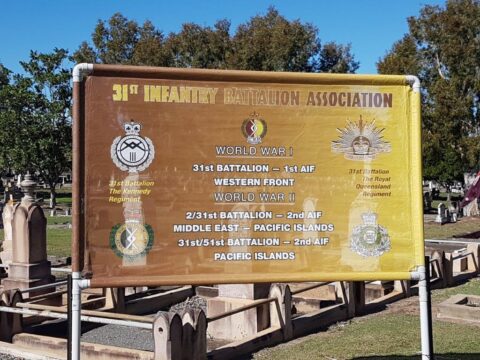 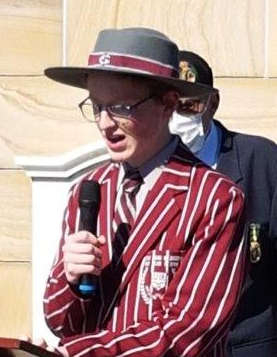 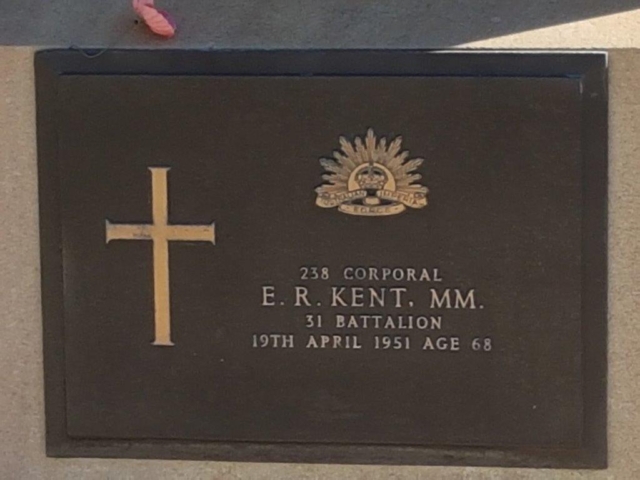 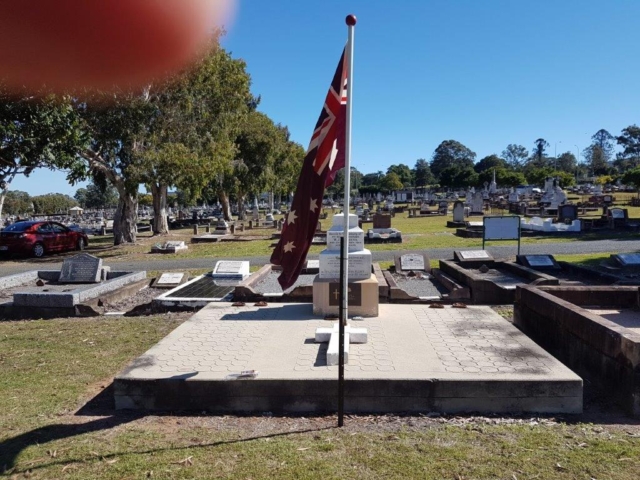 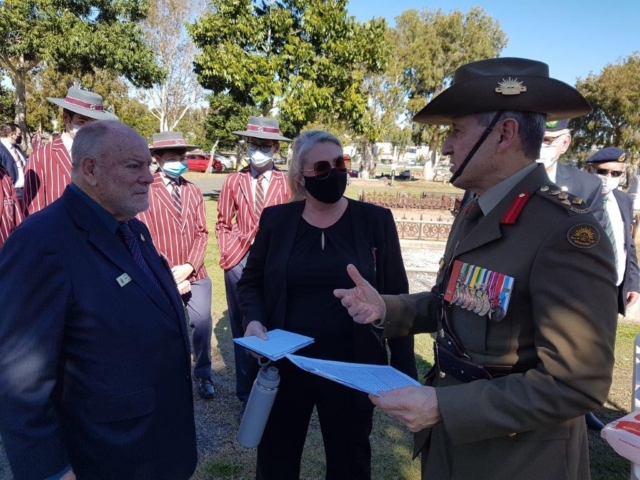 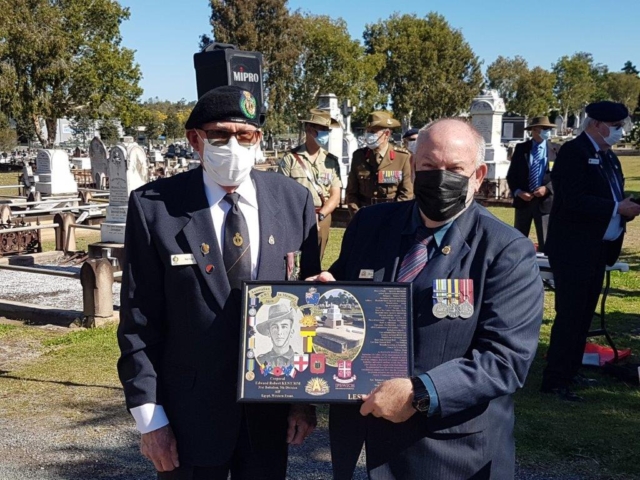 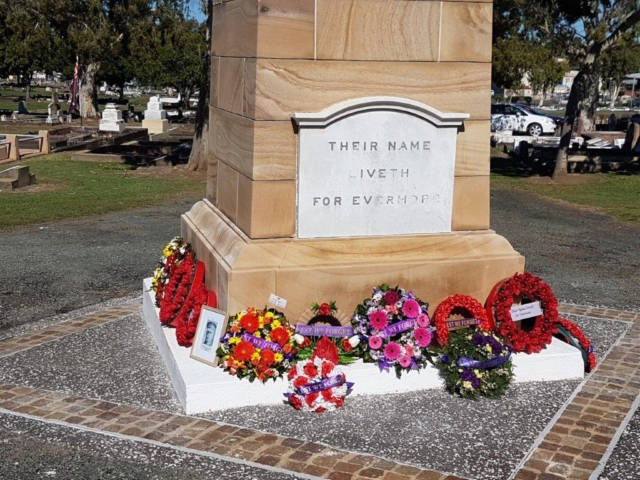 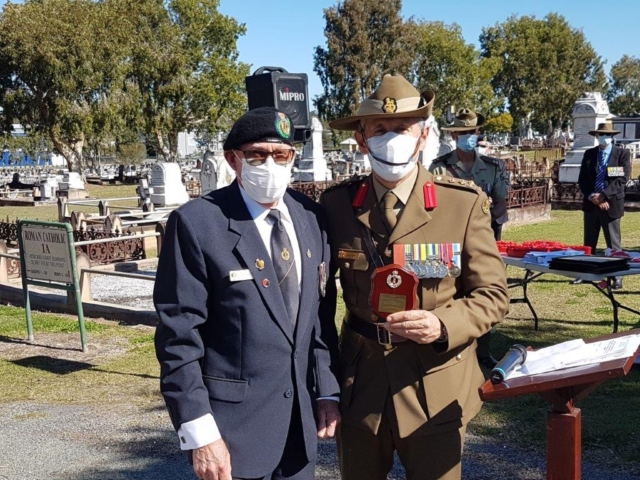 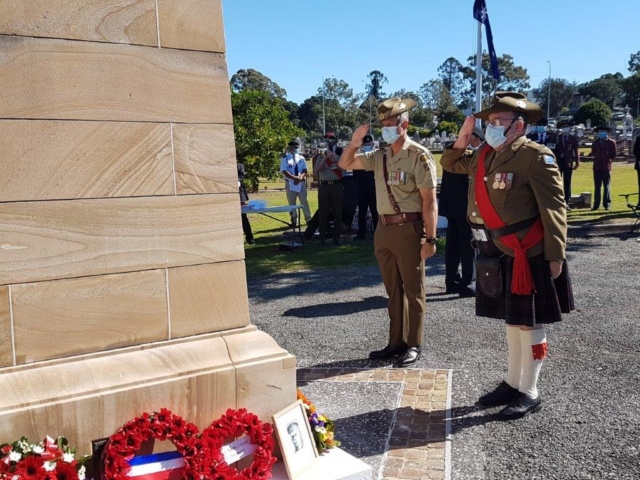 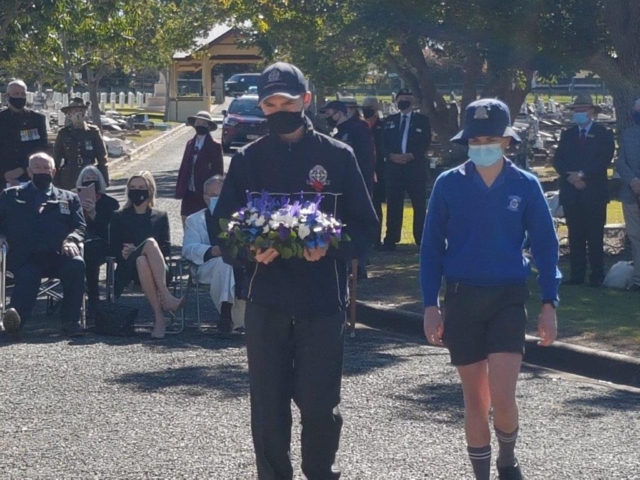 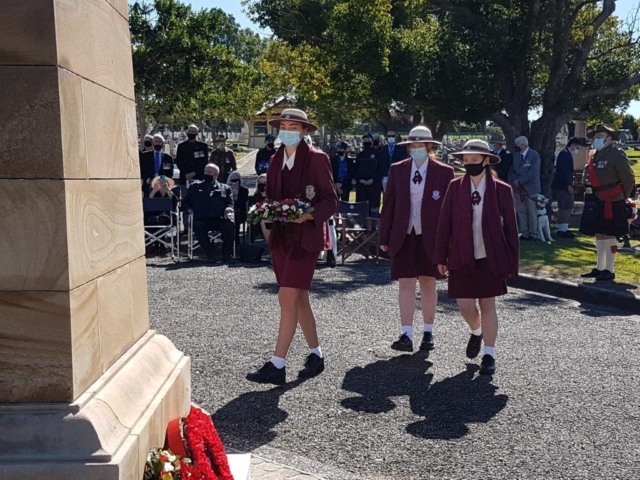 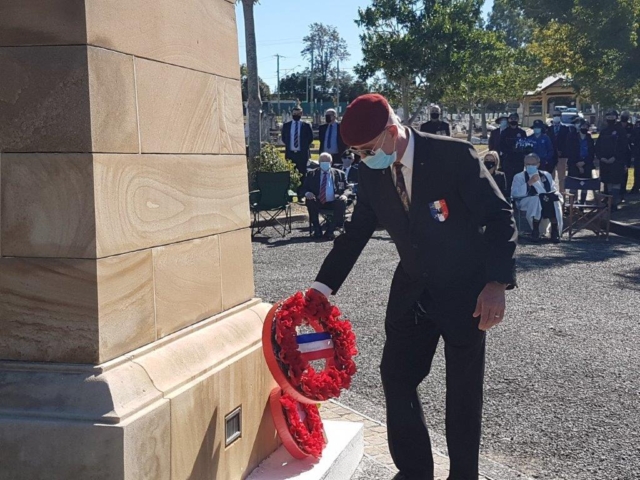 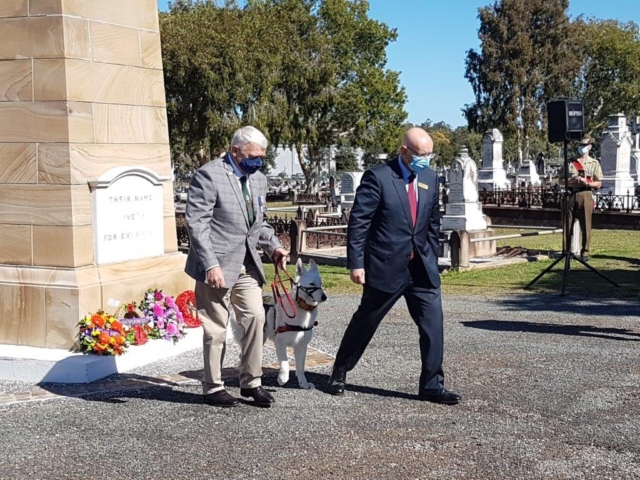 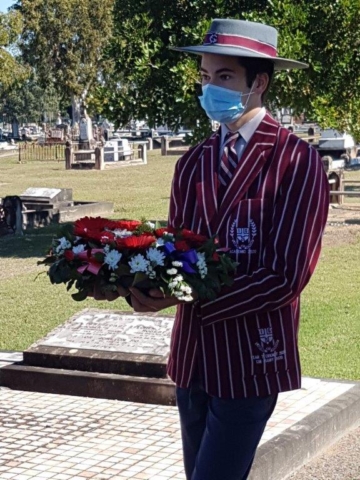 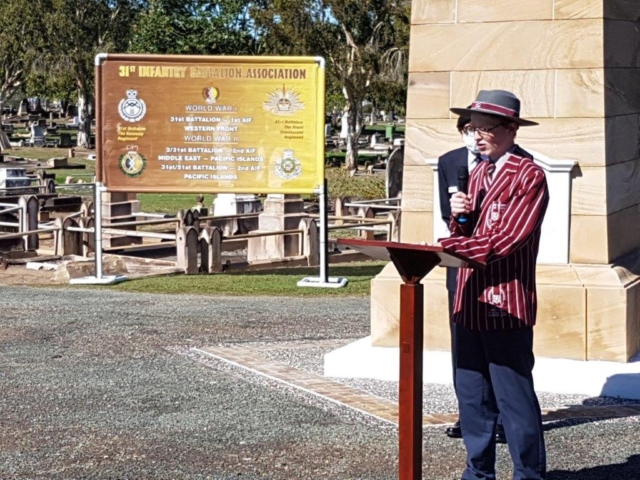 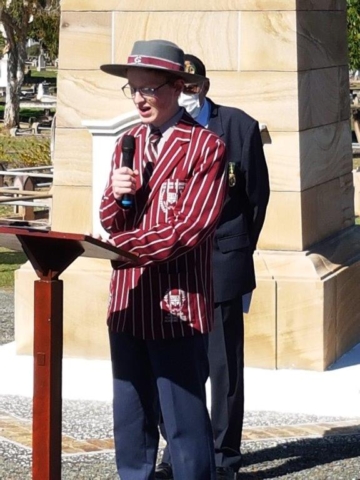 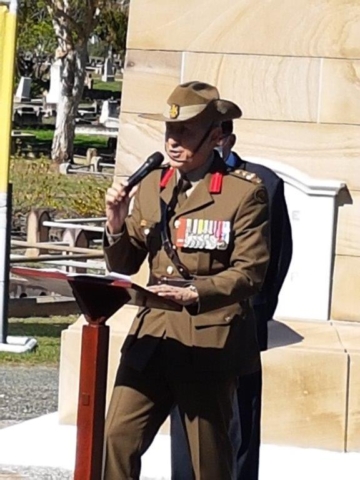 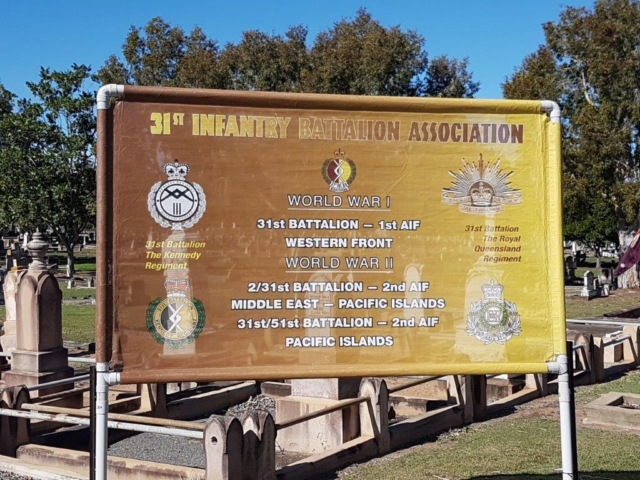 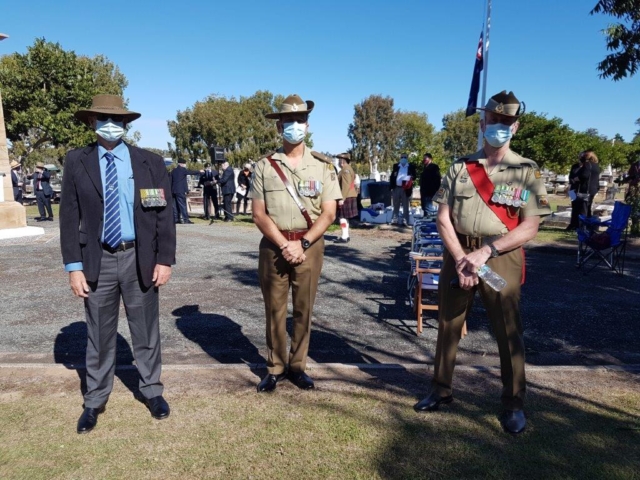 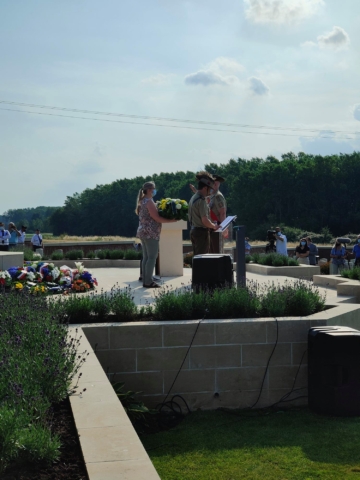 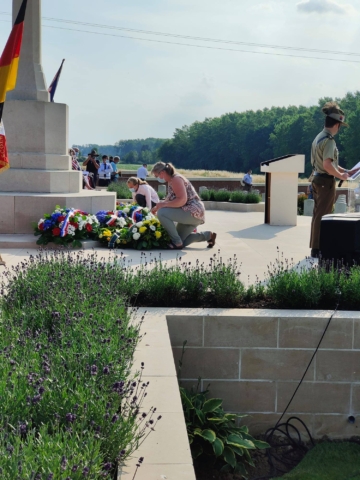 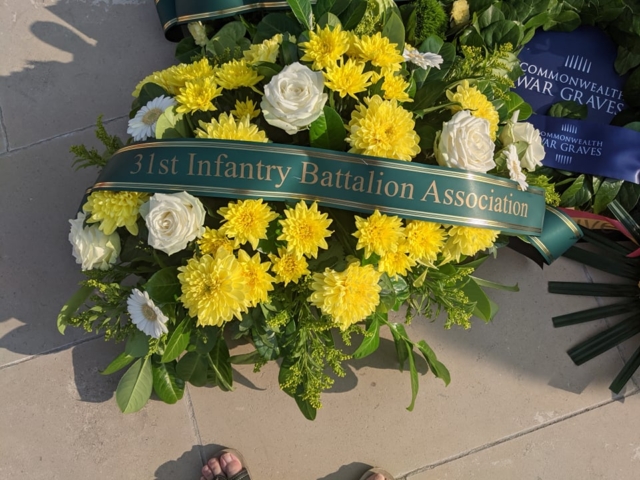