Skip to content
Member Mick James reports on the wreath laying on 28th September 2021:
In email discussions with Lambis Englezos today, he mentioned that today he was visiting the 31st Battalion tree in the grounds of the Shrine that we visited on my trip to Melbourne in March/April this year.
Of course, today is the 104th Anniversary of the start of the Battle of Polygon Wood, which is is one of the 31st Battalion’s Honours and in which the 5th Division’s & 31st Battalion’s Paddy Bugden was awarded the 1st Victoria Cross in the Division.
Lambis has subsequently emailed me a photo of him at the 31st Battalion tree with a Wreath. As we well know, Victoria’s 15th Brigade was also in the Battle of Polygon Wood.
LEST WE FORGET 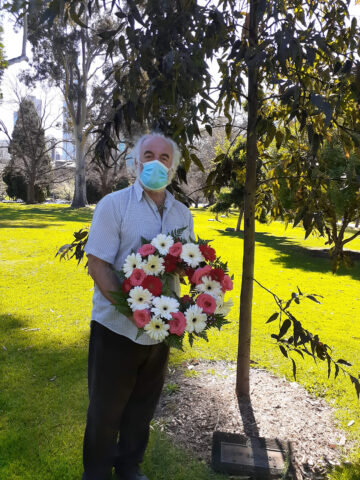 Lambis Englezos AM – laying the wreath at the 31st Battalion Tree
–
Mick continues with the continuing story of Lambis Enhlezos AM and a new project that he is tackling:
–
Everyone, I’m sure, is aware of the efforts of Lambis Englezos AM & his team in finding the Diggers who were killed in German lines in the Battle of Fromelles and buried by the Germans undisturbed for almost a century, and then  the long road of convincing the authorities and Government to dig for them and give them a proper burial.
–
Now with the burial in the new Pheasant Wood Military Cemetery more than a decade ago, and with 166 now identified (and more to come), the closure and pride it has given to so many families is amazing.
–
Lambis and his mates have been investigating undiscovered Aussie graves at Krithea on Gallipoli for at least 5 years. They visited Gallipoli with the 60 Minutes crew before Covid struck and 60 Minutes have now released their story with Lambis yesterday. It will most likely be shown this coming Sunday night (31st October 2021). He is again finding the same reticence by the authorities and Government to show any interest in finding the bodies and proper re-burials. But, as many of us know, Lambis won’t give up in his quest  to give them a proper burial
–
You can watch it now here-  https://www.youtube.com/watch?v=3G8E5GPZ9-0
–
Mick James