Information on Maj Harry Murray VC DSO and Bar was put together by Mick James. Normally this website concentrates on members of the 31st Battalion in all of its various forms however Harry’s rise from Private to LtCol and his multiple awards for bravery make him one most decorated of Australia’s sons in WW1. The investiture ceremony for his bravery awards is included below.

“For the first time in the war, an investiture ceremony would be held in public, and in Hyde Park rather than Buckingham Palace. The event was scheduled for the afternoon of Saturday 2 June, announced in advance to ensure a good turn-out.
An enclosure was prepared in an area of the park between the Serpentine and Knightsbridge Barracks, and a canopied pavilion set up for the King to make the presentations. Areas were set aside with seating for various dignitaries, and for several hundred wounded servicemen from the hospitals in the London area, and there was ample space for thousands of the general public.”
“No less than 351 presentations were scheduled, including fifty posthumous awards to be received by next-of-kin. Also, there were to be 11 Victoria Crosses presented.
–
Saturday 2 June 1917 was a beautiful summer day in London. Spectators and guests began to assemble in the early afternoon, and at 2.00 pm the massed bands of the Brigade of Guards, leading a guard of honour from the Scots Guards, began to march up Constitution Hill to Hyde Park Corner, and along The Row, which was lined with spectators, to the enclosure in Hyde Park. The men and women receiving decorations filled several rows of seats in front of the pavilion. Observers noted the wide variety of uniforms, and the row of people wearing black, who were receiving the awards of their dead relatives.”
The reporter from “The Times” was moved to note that the gathering included “men of every class and from many walks of life….. who, before the war had no thought beyond peaceful employment…. gathered here to receive from their King….. decorations for acts of war which three years ago would have seemed impossible to them.”
–
The King left Buckingham Palace at 2.35 pm in the royal carriage, accompanied by the Queen and Princess Mary, and followed by further carriages conveying various aides and equerries (including Sir Ian Hamilton, erstwhile commander-in-chief at Gallipoli). The royal party was cheered enthusiastically by the large crowd during the 10 minute drive to the pavilion; alighting from his landau, the King saluted as the Royal Standard was broken out, inspected the guard, and mounted the pavilion to begin the investiture.
–
The recipients were allocated numbers designating their place in the order of appearance; these had been published in the press with the corresponding names, and were displayed on large cards around the area as each came up to the King. Number one on the list, first of the distinguished company to march up the ramp, was Major Henry William Murray of the 13th Australian Infantry Battalion.
It was most unusual to present a Victoria Cross and a double Distinguished Service Order to one man at the same time, and it was reported that the King spoke to Murray at considerable length; one account said for fifteen minutes, but this was probably an exaggeration as the whole investiture was scheduled for only an hour and three-quarters.
“The Times”, taking note of the wording of Murray’s VC citation, commented that “he seems to have accomplished nearly every task it was possible to set himself in an attack”, a statement with which it would be hard to disagree.
From Jeff Hatwell’s book “No Ordinary Determination- Percy Black and Harry Murray of the First AIF”. 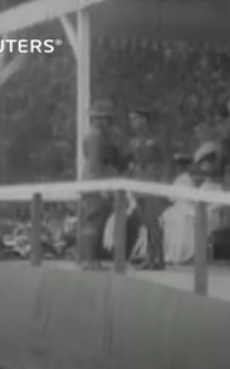 For most conspicuous bravery when in command of the right flank company in attack. He led his company to the assault with great skill and courage, and the position was quickly captured. Fighting of a very severe nature followed, and three heavy counter-attacks were beaten back, these successes being due to Captain Murray’s wonderful work.

Throughout the night his company suffered heavy casualties through concentrated enemy shell fire, and on one occasion gave ground for a short way. This gallant officer rallied his command and saved the situation by sheer valour.

He made his presence felt throughout the line, encouraging his men, heading bombing parties, leading bayonet charges, and carrying wounded to places of safety.

His magnificent example inspired his men throughout.

The award of the VC was for actions in the attack on Stormy Trench at Gueudecourt just north of the Somme in February 1917.

Previously in August 1916 Harry had been awarded the DSO for his successful company attack on Moquet Farm then in a later action (April 1917) at Bullecourt he was awarded a bar to his DSO.