The following copies of letters, orders, diary extracts relate to the the part played by Lt Richard Aubrey Lewis (B Coy 2/31st battalion) in the surrender of the Japanese forces in the Banjarmasin/Kotawaringin areas of Kalimantan, Borneo in September 1945.

They were gathered and collated by his son, 31st Battalion Association member Tim Lewis.

“On the 25th of September I left Bandjamasin to proceed to Kotawaringin to accept the surrender of the Jap garrison. It was an interesting trip Lieut C Allan Hard and Sub-Lieut Col Gillespie were the naval officers of HMAL 1359 which carried portion of my party. The remainder under Sgt Hewston, travelled on a Jap coastal steamer.” 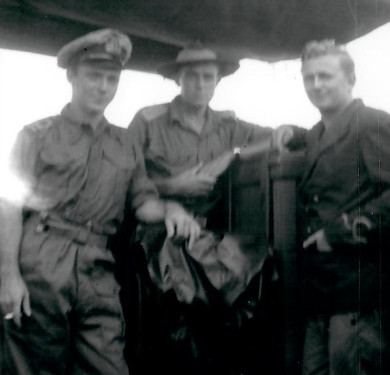 accept the surrender of members of Japanese Forces 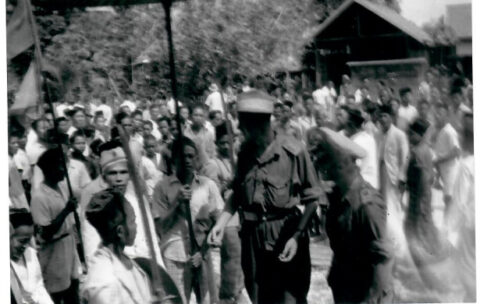 This is the main administration centre of the Kota Waringin Area 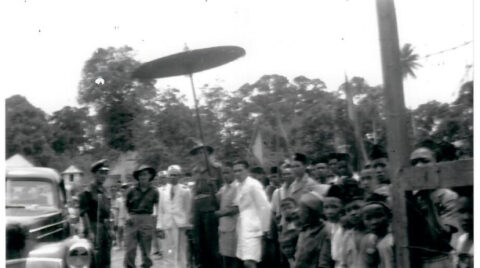 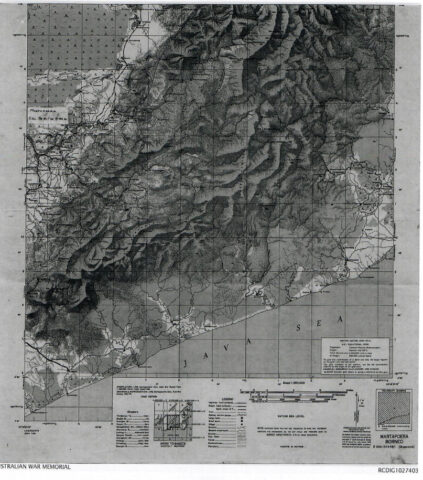 Chart of the Kalimantan Coastline East of Banjarmasin 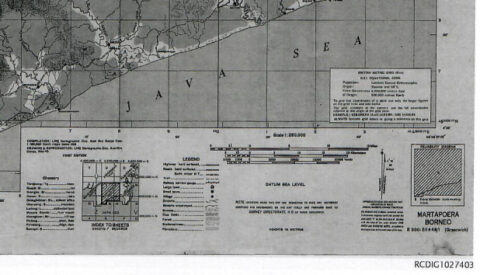 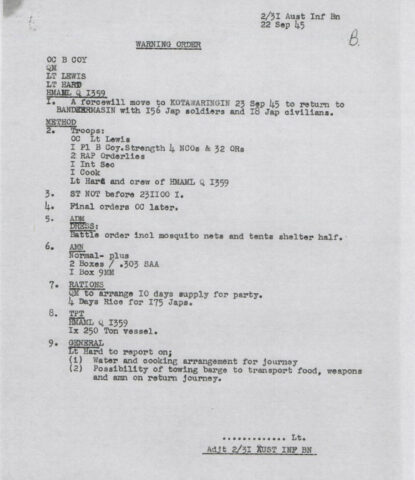 Warning Order given to Lt RA Lewis and key personnel on the day prior (22 Sep 1945). The order was for the move to Kota Waringin on 23 Sep 1945 to bring back Japanese 156 Soldiers and 18 Civilians. 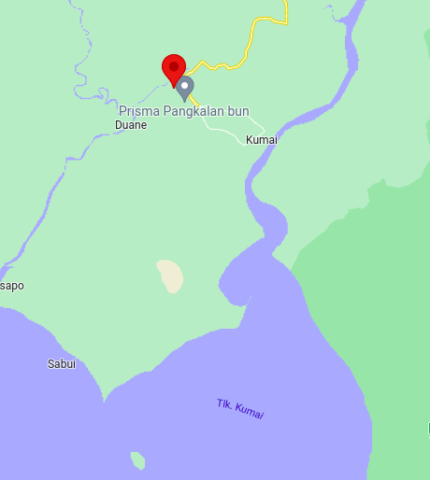 Below is an extract from the War Diary covering the period between 23 Sep 45 to 28 Sep 45.

Transporting of Japanese forces for processing at Banjarmasin. 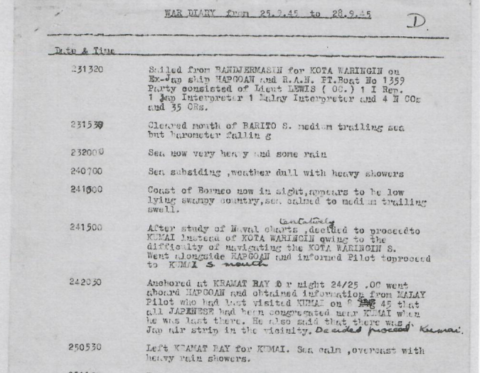 The Kota Waringin area is approx 450km to the west of Banjarmasin. The journey took just over 24 hrs to complete

Because of Navigation concerns they spent the night of 24/25 anchored (with the HAPGOAN, the coastal vessel that was to transport the Japanese) at the mouth of the river before going upstream to Kumai on 25 Sep. At Kumai, the village headman reported that majority of the Japanese had been assembled 1km north of Kumai. 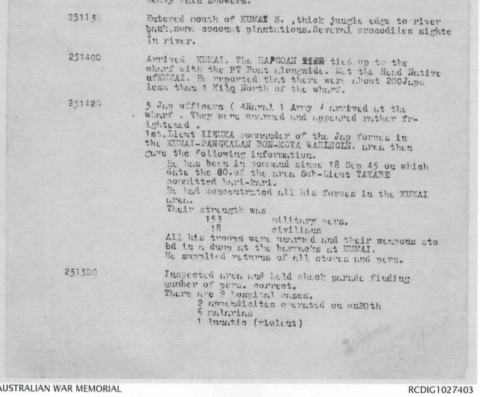 A number of Japanese Officars (4 Naval and 1 Army) presented themselves to Lt Lewis at the Kumai wharf. Lt IIzuka reported that 153 soldiers and 18 Civilians  were in their party north of Kumai, 9 of whom were hospital cases suffering from (2 x appendicitis, 6 Malaria and 1 a Violent Lunatic). Weapons were centralised and stored. The OC of their sub unit Sub-Lt Takare had previously committed Hari Kari. Lt Lewis was able to inspect and confirm these reported numbers. 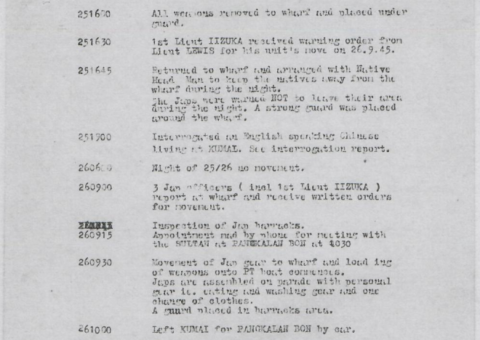 All Japanese were moved to the wharf and placed under guard. Lt Iizuka was given a warning order that they were to be moved to BANJARMASIN on 26 Sep. An English speaking Chinese was interrogated. Report shown below.

Arrangements were made for meeting with the Sultan in PANGKALAN BUN. 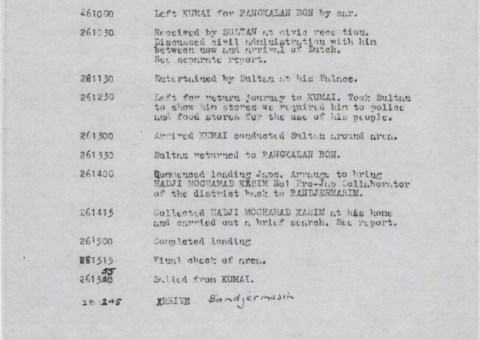 Travelled to PANGKALAN BUN by car (approx 15KM via road) to Sultans palace.

Lt Lewis was received by the Sultan at a civic reception at his Palace. The civil administration was

returned to the Sultan whose position had been eroded during the Japanese occupation.

The Sultan returned with Lt Lewis to Kumai to be briefed on the stores and supplies that were to be policed.

The Japanese and one of their local collaborators (Hadji Mochamad Kasim) were loaded on the vessels. 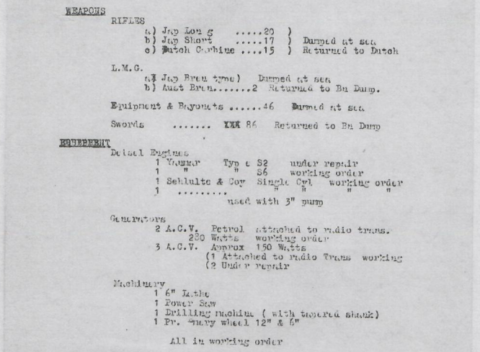 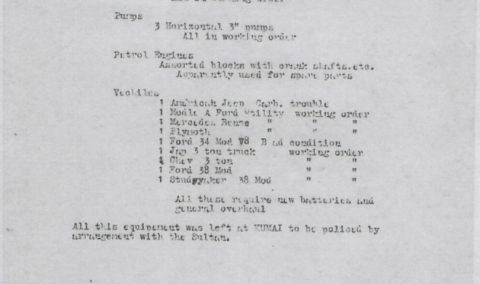 The above list is the weapons and equipment handed over by the Japanese. A number of rifles and LMGs most of which were dumpted at sea. The Dutch captured weapons were returned to the Dutch.

The Japanese swords were returned to the Bn store.

Most of this equipment was left to be policed by the Sultan’s men. 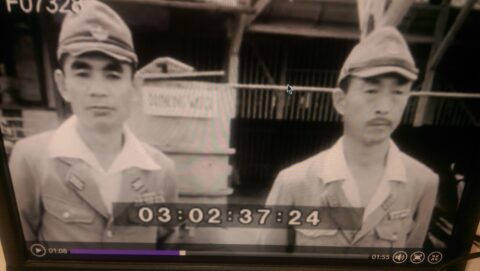 This image was taken from either NAA or AWM footage.

This note is from Tim Lewis (the son of Lt RA Lewis)”I can only assume that my father accepted the garrison surrender from Captain Iizuka with WO Iwase by his side. ( These names appeared elsewhere in my father’s diaries)”. 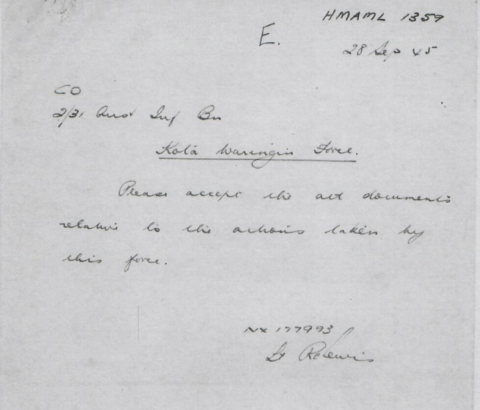 to discuss the restoration of the civil administration.

The Sultan expresses his concerns regarding his reduced status during the Japanese Occupation.

pending the arrival of the Dutch Administration. 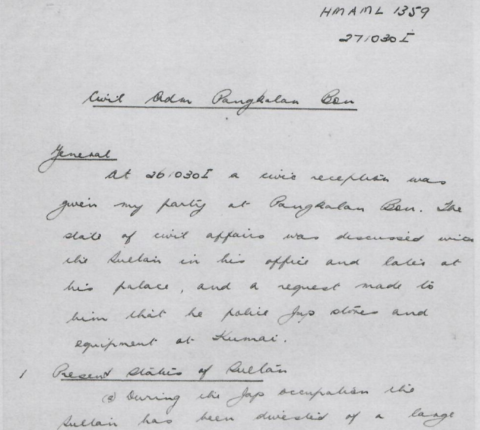 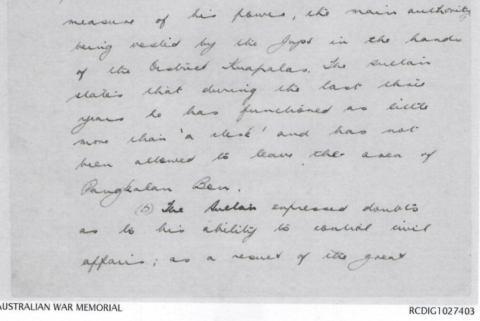 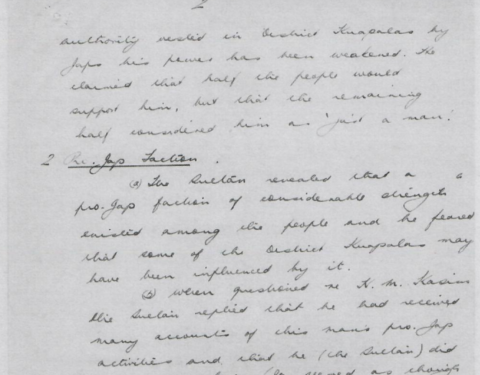 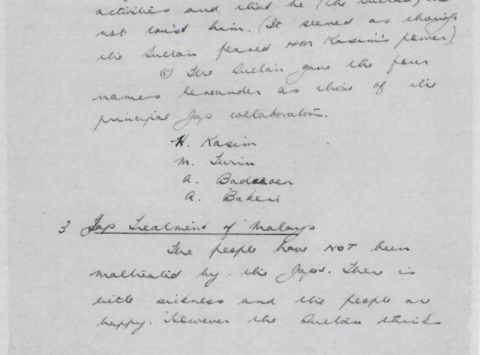 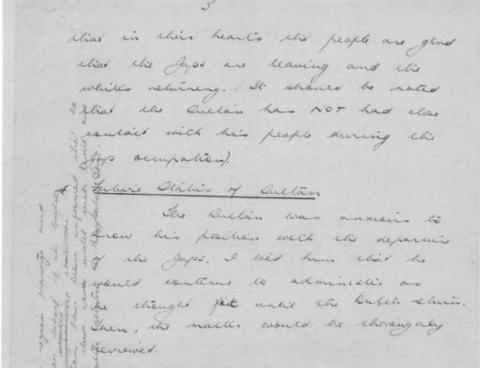 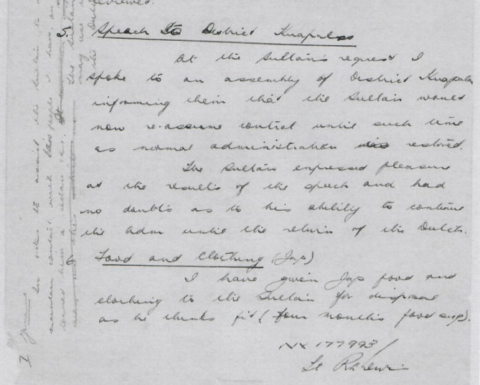 Document F is a Patrol Report

The patrol was to ascertain whether and large numbers of Japanese were in the area and to locate any Japanese weapons.

searched but no weapons were found. Weapons previously founded were handed to a patrol from C Coy. 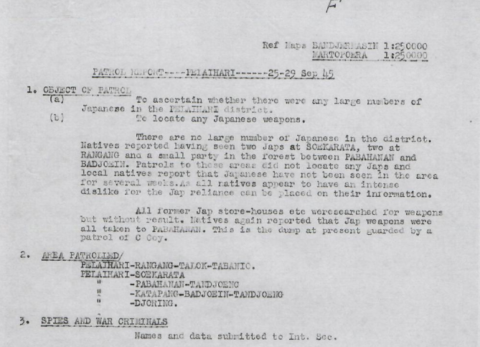 Document C is an Interrogation Report

This report is from the interrogation of an English speaking Chinese concerning the man Hadji Mochamad Kalim who was brought back from Kumai to Banjarmasin on the Naval vessel. Kalim was named as a Japanese collaborator. He had lived in the Kumai area since 1936 There were two occasions where Kalim received a token punishment from the Japanese for trying to buy a radio and for fishing. The same offences perpetrated by others would result in much harsher punishment.

In 1942 There were 1000 British and Dutch troops in the area but these had subsequently been transferred to Banjarmasin. since then there were not many Japanese in the area until they built an airstrip 6 months before the end of the war. The factory and equipment at Kumai was used in the manufacture of swords and in support of the air strip operations. 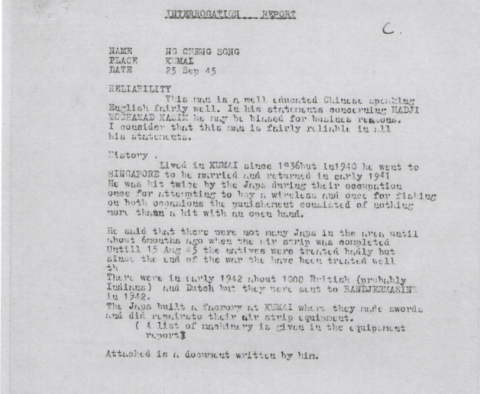 Below is the report from the Chinese person in his own handwriting. 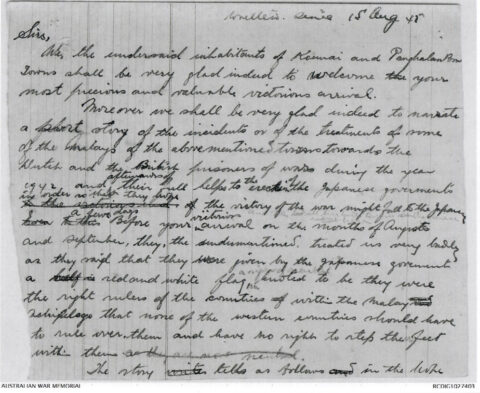 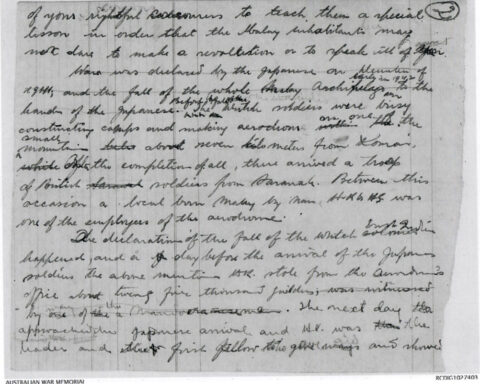 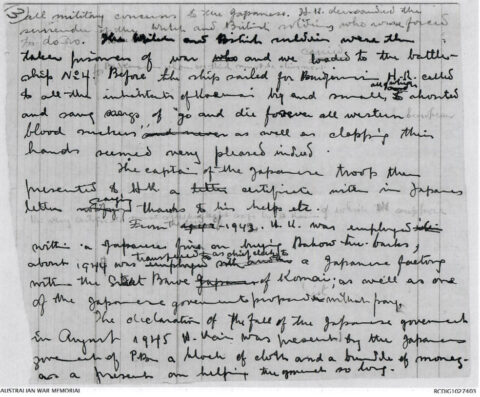 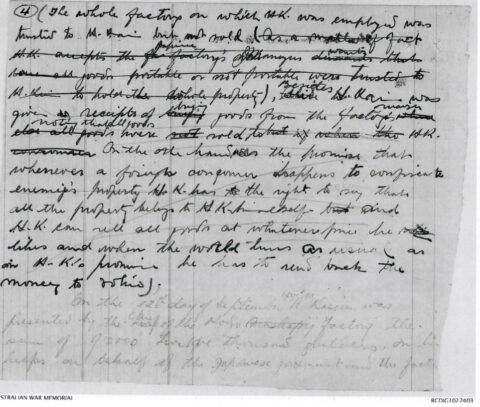 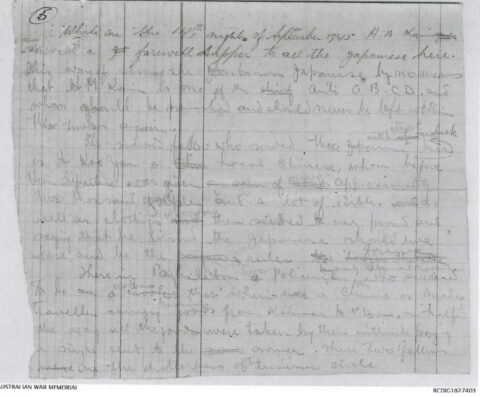 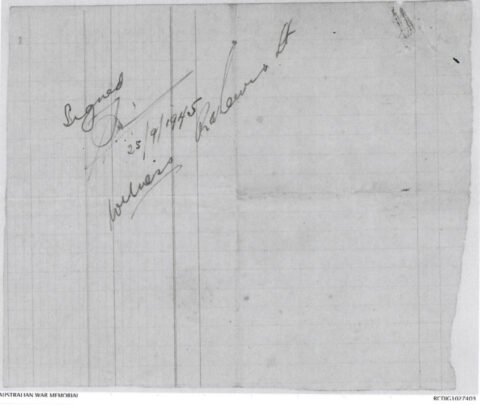