Regular contributor to the 31 Battalion association website, Mick James, has uncovered the amazing story of Capt Frank Smith MC DFC, an original 31st Battalion WW1 digger, who, fought in the battle of Fromelles (also known as Fleurbaix in the diary by the CO LtCol Toll). After being commissioned he was awarded an MC with 31st Battalion for his actions in a raid which he led, whilst wounded, near Armentieres. He then trained with the Australian Flying Corps (AFC) in 1917 and subsequently was awarded a DFC in 1918.

Much of the research was done by Melbourne based 31 Battalion historian, Peter Nelson whose grandfather fought in WW1.

Mick goes on to say “I was amazed that he had a MC with 31st Bn & a DFC and did further research. It is
an amazing story. I found a photo of Capt Frank Smith MC DFC  in the annual photos of St Leo’s College Uni of Qld for 1919. Long story short, I was invited to give the ANZAC Lecture at the College prior to ANZAC Day last year. Photos and the story of Capt Frank Smith MC DFC were published in the 31st Bn  AIF Memorial Association Facebook page last year.”

Peter Nelson continued with further research (very detailed) and has produced a 2 part story on Frank. The 2nd part is his post WW1 life leading to his WW2 experience. Click on the links below for the full story. 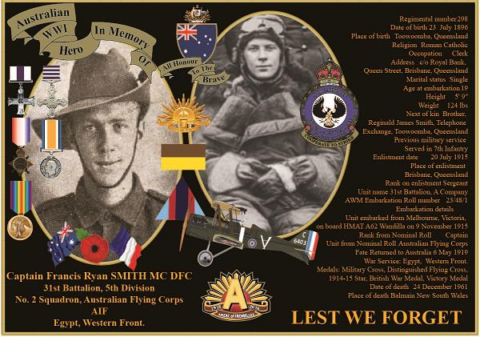